Dr Zi Yang MENG from Division of Physics and Astronomy, Faculty of Science, the University of Hong Kong (HKU), is pursuing a new paradigm of quantum material research that combines theory, computation and experiment in a coherent manner. Recently, he teamed up with Dr Wei LI from Beihang University, Professor Yang QI from Fudan University, Professor Weiqiang YU from Renmin University and Professor Jinsheng WEN from Nanjing University to untangle the puzzle of Nobel Prize-winning theory Kosterlitz-Thouless (KT) phase.

Not long ago, Dr Meng, Dr Li and Dr Qi achieved accurate model calculations of a topological KT phase for a rare-earth magnet TmMgGaO4 (TMGO), by performing computation on the Supercomputers Tianhe 1 and Tianhe 2 (see supplementary information); this time, the team overcame several conceptual and experimental difficulties, and succeeded in discovering a topological KT phase and its transitions in the same rare-earth magnet via highly sensitive nuclear magnetic resonance (NMR) and magnetic susceptibility measurements, means of detecting magnetic responses of material. The former one is more sensitive in detecting small magnetic moments while the latter one can facilitate easy implementation of the experiment.

These experimental results, further explained the quantum Monte Carlo computations of the team, have completed the half-a-century pursuit of the topological KT phase in quantum magnetic material, which eventually leads to the Nobel Physics Prize of 2016. The research findings are recently published in renowned academic journal Nature Communications.

KT phase of TMGO is detected

Quantum materials are becoming the cornerstone for the continuous prosperity of human society, including the next-generation AI computing chips that go beyond Moore's law, the high-speed Maglev train, and the topological unit for quantum computers, etc. However, these complicated systems require modern computational techniques and advanced analysis to reveal their microscopic mechanism. Thanks to the fast development of the supercomputing platforms all over the world, scientists and engineers are now making great use of these facilities to discover better materials that benefit our society. Nevertheless, computation cannot stand alone.

In the present investigation, experimental techniques for handling extreme conditions such as low temperature, high sensitivity and strong magnetic field, are required to verify the predictions and make discoveries. These equipments and technologies are acquired and organised by the team members coherently.

The research is inspired by the KT phase theory discovered by V Berezinskii, J Michael Kosterlitz and David J Thouless, of which the latter two are laureates of the Nobel Prize in Physics 2016 (together with F Duncan M Haldane) for their theoretical discoveries of topological phase, and phase transitions of matter. Topology is a new way of classifying and predicting the properties of materials, and now becoming the mainstream of quantum material research and industry, with broad potential applications in quantum computer, lossless transmission of signals for information technology, etc. Back to 1970s, Kosterlitz and Thouless had predicted the existence of topological phase, hence named after them as the KT phase in quantum magnetic materials. Although such phenomena have been found in superfluids and superconductors, KT phase has yet been realised in bulk magnetic material, and is eventually discovered in the present work.

To detect such interesting KT phase in a magnetic material is not easy, as usually the 3-dimensional coupling would render magnetic material to develop ordered phase but not topological phase at low temperature, and even if there exists a temperature window for the KT phase, highly sensitive measurement technique is required to be able to pick up the unique fluctuation pattern of the topological phase, and that is the reason why such phase has been enthusiastically perused, but its experimental discovery has defied many previous attempts. After some initial failures, the team member discovered that the NMR method under in-plane magnetic fields, do not disturb the low-energy electronic states as the in-plane moment in TMGO is mostly multipolar with little interference on magnetic field and intrinsic magnetic moments of the material, which consequently allows the intricated topological KT fluctuations in the phase to be detected sensitively.

As shown in Fig.1, NMR spin-lattice relaxation rate measurements indeed revealed a KT phase sandwiched between a paramagnetic phase at temperature T > T_u and an antiferromagnetic phase at temperature T < T_l. The plateau signature is the long-sought-after KT phase. The establishment of a KT phase is further substantiated by the large-scale quantum Monte Carlo computations on NMR and susceptibility on a lattice model with accurate parameters (as shown in Fig.2) by the team members. These results provide not only unambiguous evidence for the KT phase and transitions at zero field, but also a region at finite field with fluctuating KT signatures. This indicates that KT phase can exist stably within a certain parameter interval with specific temperature and pressure range.

Dr Meng said: "It will eventually bring benefits to the society, such that quantum computers, lossless transmission of signals for information technology, faster and more energy-saving high-speed trains, all these dreams could gradually come true from quantum material research."

"Our approach, combining the state-of-art experimental techniques with unbiased quantum many-body computation schemes, enables us to directly compare experimental data to accurate numerical results with key theoretical predictions quantitatively, providing a bridge way to connect theoretical, numerical and experimental studies, the new paradigm set up by the joint team will certainly lead to more profound and impactful discoveries in quantum materials." He added.

The supercomputers used in computations and simulations

The powerful supercomputers Tianhe-1 and Tianhe-2 in China used in the computations are among the world's fastest supercomputers and ranked No.1 in 2010 and 2014 respectively in the TOP500 list (https://www.top500.org/). Their next-generation Tianhe-3 is expected to be in usage in 2021 and will be world first exaFLOPS scale supercomputer. The quantum Monte Carlo and tensor network simulations performed by the joint team make use of the Tianhe supercomputers and requires the parallel simulations for thousands of hours on thousands of CPUs, it will take more than 20 years to finish if performed in common PC.

About Dr Zi Yang Meng and the team

Dr Zi Yang Meng is an expert in Monte Carlo simulation of quantum many-body systems, and has recently made a breakthrough in quantum metal research (see https://www.hku.hk/press/press-releases/detail/21179.html)

Dr Wei Li from the Beihang University is the developer of state-of-art tensor network approach, that could compute the temperature and magnetic field response of quantum many-body systems;

Professor Yang Qi of Fudan University performed the quantum field theory analysis of the numerical results and make sense of it all;

Professor Weiqiang Yu of Renmin University of China developed the low-temperature and highly sensitive nuclear magnetic resonance experimental platform and is well-known in his works on high-temperature superconductor and quantum magnetic materials;

The work was supported by the Research Grants Council of HKSAR, the Ministry of Science and Technology of China and the National Science Foundation of China. 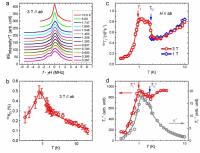