Long-term droughts in the Southwestern North America often mean failure of both summer and winter rains, according to new tree-ring research from a University of Arizona-led team.

The finding contradicts the commonly held belief that a dry winter rainy season is generally followed by a wet monsoon season, and vice versa.

The new research shows that for the severe, multi-decadal droughts that occurred from 1539 to 2008, generally both winter and summer rains were sparse year after year.

"One of the big questions in drought studies is what prompts droughts to go on and on," said lead author Daniel Griffin, a doctoral candidate in the UA School of Geography and Development. "This gives us some indication that the monsoon and its failure is involved in drought persistence in the Southwest."

The new 470-year-long history of summer precipitation in the Southwest covers most of Arizona, western New Mexico and parts of northern Mexico.

"This is the first time researchers have used tree rings to take a closer look at the monsoon in a large and important area of the American Southwest," said Griffin, who also is an EPA STAR Research Fellow at the UA Laboratory of Tree-Ring Research.

"Monsoon droughts of the past were more severe and persistent than any of the last 100 years," he said. "These major monsoon droughts coincided with decadal winter droughts."

Those droughts had major environmental and social effects, Griffin said, pointing out that the late-16th-century megadrought caused landscape-scale vegetation changes, a 17th-century drought has been implicated in the Pueblo Revolt of 1680 and the 1882-1905 drought killed more than 50 percent of Arizona's cattle.

Co-author Connie A. Woodhouse, UA associate head and associate professor of geography and development, said, "The thing that's interesting about these droughts is that we've reconstructed the winter precipitation, but we've never known what the summers were like."

Because winter precipitation has the strongest influence on annual tree growth, previous large-scale, long-term tree-ring reconstructions of the region's precipitation history had focused only on the winter rainy season.

The National Science Foundation, the National Oceanic and Atmospheric Administration and the U.S. Environmental Protection Agency supported the research.

"In the Southwest, the winter precipitation is really important for water supply. This is the water that replenishes reservoirs and soil moisture," Woodhouse said. "But the monsoon mediates the demand for water in the summer."

Until recently, most tree-ring researchers, known as dendrochronologists, have looked at the total width of trees' annual rings to reconstruct past climate. Few teased out the seasonal climate signal recorded in the narrow part of the growth ring laid down in late summer known as latewood.

To figure out the region's past history of monsoon precipitation, the scientists needed to measure latewood from tree-ring samples stored in the archives of the UA Laboratory of Tree-Ring Research and go into the field to take additional samples of tree rings.

In all, the researchers used samples from 50 to 100 trees at each of 53 different sites throughout southwestern North America. The team's climate analyses focused on NAM2, which covers most of Arizona, western New Mexico and northern parts of the Mexican states of Sonora and Chihuahua.

Griffin said, "It was a massive undertaking -- we employed about 15 undergraduates over a four-year period to measure almost 1 million tree rings."

The results surprised him because rain gauge records for the Southwest from 1950-2000 show dry seasons alternated with wet ones.

However, the team's new multi-century record going back to 1539 shows that the wet/dry pattern of the latter part of the 20th century is not the norm – either prior to the 20th century or now, he said.

One possible next step, Woodhouse said, is to expand the current project to other areas of the Southwest and into Mexico, where the monsoon has a bigger influence on annual precipitation.

Another would be using tree-ring reconstructions of the Southwest's fire histories to see how wildfires are related to summer precipitation.

Griffin said, "Before I moved to the Southwest, I didn't realize how critically important the summer rains are to the ecosystems here. The summer monsoon rains have allowed humans to survive in the Southwest for at least 4,000 years." 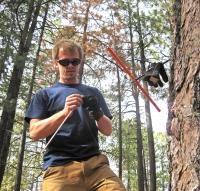 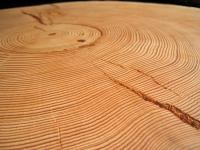