SAN FRANCISCO (December 20, 2013) — In 2013, researchers at the California Academy of Sciences discovered 91 new plant and animal species and two new genera, enriching our understanding of the complex web of life on Earth and strengthening our ability to make informed conservation decisions. The new species, previously unknown to science, include 38 different ants, 12 fishes, 14 plants, eight beetles, two spiders, one reptile, and one amphibian. In addition, Academy scientists discovered a new genus of beetle and a previously unidentified genus of sea fan. More than a dozen Academy scientists along with several dozen international collaborators described the newly discovered plants and animals.

Proving that there are still plenty of places to explore and things to discover on Earth, the scientists ventured into remote jungles and descended to the bottom of the sea, looked in their own backyards (California) and explored the other side of the world (Africa). Their results, published in more than 30 scientific papers, help advance the Academy's research into two of the most important scientific questions of our time: "How did life evolve?" and "How will it persist?" "Our best estimates are that we have discovered and described less than 10 percent of the life forms on Earth," said Dr. Terry Gosliner, Dean of Science and Research Collections at the Academy. "As we race to discover the other 90 percent of the species that make up the tapestry of life, we are focusing our efforts on global biodiversity hotspots—places that are both unusually diverse and highly threatened, including many tropical forests, coral reef communities and our own backyard, California." Below are a few highlights among the 91 species described by the Academy this year. For a full list of species, including geographic information, contact Chris Bauer via email at cbauer@calacedemy.org or phone at 415-379-5123.

The islands of the southwestern Indian Ocean, especially Madagascar, are composed of extremely fragmented natural habitats and are renowned for hosting many endemic species—those that cannot be found anywhere else on Earth. This is a place the California Academy of Sciences considers a global biodiversity hotspot. However, Madagascar's biodiversity is increasingly threatened, adding new urgency to the research being conducted on the island. This year, Academy scientists were able to identify 38 previously unknown ant species, seven new plants and two new spider species from Madagascar.

Academy scientist Brian Fisher, an entomologist who specializes in the study of ants, calls them "the glue that holds ecosystems together." "Ants are one of the most important members of ecosystems," says Fisher. "They turn over more soil than earthworms." But they're also some of the most overlooked, he says. "If they were bigger, they would be the most studied type of organism, but people don't see them."

Now, Fisher and his team are able to look for these small creatures in a new way. Recently, satellite companies and engineers from Google have provided Academy researchers with high-resolution satellite images of some of the least explored areas of Madagascar. Equipped with a GPS-enabled tablet loaded with customized software and recent high-res images, Fisher and his colleagues can identify which patches of forest are most likely to contain new species of ants based on their elevation, vegetation and adjacent habitats.

The work being done by Academy scientists is helping to correct a long-standing bias in habitat conservation. "If you base conservation on just vertebrates," Fisher says, "it leads you to conclude that only the largest forests are important. Ants and other insects provide a better map of true biodiversity."

While researchers from the California Academy of Sciences are spanning the far reaches of the globe to find new plants, animals, and other life forms, there are still many things to discover closer to home. In 2013, Academy scientists discovered two new plant species and eight new beetles from Mexico.

In his time as a naturalist, Charles Darwin was fascinated with beetles and amassed one of the world's most important collections. Today, researchers at the Academy are continuing that tradition. On November 19, 2013, Igor Sokolov, a Schlinger Postdoctoral Fellow at the California Academy of Sciences, published a paper on ZooKeys, describing eight new species and a new genus of beetle.

According to Sokolov, these miniscule ground beetles remain largely uninvestigated. Prior to his recent discoveries, there were only two other species from two different genera described from Mexico. These beetles rarely emerge and are so tiny that they have gone largely unnoticed. "These types of beetles live all over the world, including here in California, but are very difficult to collect," says Dr. Dave Kavanaugh, Senior Curator of Entomology at the Academy. "Even if you can isolate them from the dirt and leaf litter where they live," Kavanaugh explains, "They're no bigger than the head of a pin, so they are nearly impossible to see with the naked eye." Then once you have found the beetles and get them back to the lab, it takes a steady hand to dissect them and tediously compare each specimen under a microscope. "Igor is the only person I know who has good enough hands to do this work," Kavanaugh says.

The study of these beetles illustrates how isolation and slight changes in habitat can influence the evolutionary process. "These beetles are blind, flightless and don't move around very much, yet they are found in nearly every corner of the world," says Kavanaugh. “This tells us that they are probably ancient. They have evolved and diverged to succeed in lowland and highland elevations, from tropical islands to dry environments. They're practically everywhere and they've been there forever, but we're only just now learning about them."

Through this research, Academy scientists are carrying on the work of Charles Darwin. "And there are more species to come," says Kavanaugh.

A case of mistaken identity points to need for increased protections

For 100 years, the fiery red sea fan with long, elegant branches had been lumped in with 36 other species of Euplexaura, until Academy octocoral expert Gary Williams was able to set the record straight. After comparing a colony collected off the coast of San Francisco to older samples in the Academy's collection, Williams announced an entirely new genus—and challenged our assumptions about familiar waters. Major cities, as Williams pointed out to Live Science, "aren't places you'd think there are still discoveries waiting to be made."

Williams, the Academy's Curator of Invertebrate Zoology and Geology, encountered the sea fan now named Chromoplexaura marki during a two-week survey of the Gulf of the Farallones National Marine Sanctuary, and it was far from the only surprise. Funded by the National Oceanic and Atmospheric Administration, the expedition team uncovered "rich and abundant habitats never seen before" in the area, prompting Williams to recommend that NOAA expand the existing sanctuary. The proposed expansion—roughly 2,000 additional square miles—would encompass the largest upwelling site in North America, better protecting the nutrient-rich waters that support everything from reefs and seabird colonies to endangered whales.

A Walk on the Ocean Floor

That was not the only new species found in the ocean this year. Scientists at the Academy dove into their collections to discover 24 other new species that live in the world's oceans. Along with the sea fan, are three new species of worm eels, three colorful gobies, three nudibanchs, two snappers, two now-extinct species of sand dollars, corals, barnacles and two new sharks. Hemiscyllium halmahera, a new species of bamboo shark from Indonesia, was described by Academy research associate Mark Erdmann. This small shark can fit in the palm of your hand and is recognized by interesting clusters of brown or white spots in polygon configurations all over its body. The color pattern it displays is a perfect camouflage that helps the animal blend into its habitat on the bottom of the sea. This bamboo shark, like a similar species on display at the Academy's Steinhart Aquarium, uses its pectoral fins to "walk" along the ocean floor. According to the paper published this year in the International Journal of Ichthyology, sharks of this genus are nocturnally active, bottom-living animals, which exhibit a peculiar "walking" gait while foraging for invertebrates and smaller fishes. Due to their reproductive mode, limited swimming ability, and poor dispersal capability most species have restricted distributions and are therefore often of conservation concern.

The Institute for Biodiversity Science and Sustainability at the California Academy of Sciences is at the forefront of efforts to understand two of the most important topics of our time: the nature and future of life on Earth. Based in San Francisco, the institute is home to more than 60 research scientists and aquarium biologists, as well as more than 28 million scientific specimens from around the world—nearly 40,000 of which are alive and on display in the Academy's Steinhart Aquarium. The institute also leverages the expertise and efforts of more than 100 international Research and Field Associates and 300 distinguished Fellows. Through expeditions around the globe, captive breeding programs, and investigations in the lab, the institute's scientists strive to understand the evolution and interconnectedness of life. Through these same efforts, as well as through partnerships, community outreach, and public engagement initiatives, the institute aims to guide critical conservation decisions and address the challenge of sustainability. Visit research.calacademy.org.

91 new species described by California Academy Of Sciences in 2013 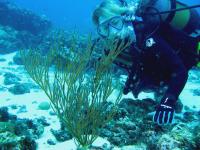