CHAMPAIGN, Ill. — Emissions regulations do have an environmental impact, according to a long-term study of acidic rainfall by researchers at the University of Illinois.

The National Atmospheric Deposition Program collects rainfall samples weekly from more than 250 stations across the United States and analyzes them for pollutants. The program recently released a report detailing trends in acidic rainfall frequency and concentration over 25 years, from 1984 to 2009.

"This is the longest-term, widest-scale precipitation pollution study in the U.S. In particular, we wanted to see how the trends in the pollution and the rain correlated back to emissions regulations," said Christopher Lehmann, a researcher in the program, which is part of the Illinois State Water Survey at the U. of I. "We're seeing regulations on emissions sources having direct and positive impact to reduce pollutants in rain."

The phenomenon commonly known as "acid rain" has widespread effects not only on the ecosystem, but also on infrastructure and the economy. Polluted precipitation adversely affects forestry, fishing, agriculture and other industries. Acid also erodes structures, damaging buildings, roads and bridges.

According to the report, acidic precipitation – rain or snowfall with a pH value of 5.0 or less – decreased in both frequency and concentration over the 25-year span.

The researchers largely attribute the decrease to the amendments to the Clean Air Act in 1990 regulating emissions of sulfur dioxide and nitrogen oxide, the gases that become sulfuric and nitric acid when mixed with rain water.

"What goes up does come down," Lehmann said. "Rainfall chemistry directly correlates with air pollution. When we looked at the magnitude of the trend, we found it compared very well to the magnitude of the decrease in emissions reported by the EPA (Environmental Protection Agency)."

According to EPA data, sulfate emissions dropped more than 50 percent during the period covered by the study and nitrate emissions dropped more than 30 percent. The National Atmospheric Deposition Program report found that concentrations of corresponding acid ions in rainwater have dropped by similar magnitudes. In addition, frequency of acidic precipitation has decreased across the U.S.

"You want to make sure that the regulations you put in place are effective, that they do what they were designed to do," said David Gay, the coordinator of the deposition program. "That's why we're here. We spend a lot of money to promulgate regulations. There's a lot of concern about their impact on industry. This study shows clear, significant evidence of the direct impact of regulation."

The deposition program continues to monitor sulfur and nitrogen compounds in rain. Although acidic precipitation has decreased, it has not disappeared, particularly remaining prevalent across the eastern U.S. In addition, the program has expanded its screening and monitoring other problematic pollutants such as ammonia and mercury.

"We still have acid rain," Lehmann said. "Yes, the trend is down, and we should celebrate that, but it's still a problem. There is still progress to be made, and there are new regulations coming along to continue to reduce emissions of sulfur and nitrogen compounds."

The Illinois State Water Survey is a unit within the Prairie Research Institute at the U. of I. 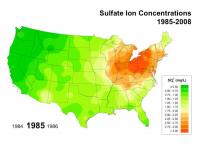 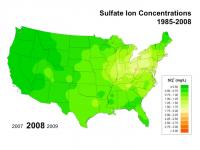