It's a tough time to be a shark. Pollution, industrialized fishing, and climate change threaten marine life, and the populations of many top ocean predators have declined in recent years. In addition to studying sharks in the wild, scientists working to save sharks rely on ones living in zoos and aquariums so that they can help build breeding programs and learn more about the conditions sharks need to thrive. One important way the scientists do that is by playing matchmakers to the sharks, pairing up individuals in ways that increase genetic diversity. In a new study in Scientific Reports, scientists undertook the largest-ever effort to artificially inseminate sharks.Their work resulted in 97 new baby sharks, including ones whose parents live on opposite sides of the country and a few that don't have fathers at all.

"Our goal was to develop artificial insemination as a tool that could be used to help support and maintain healthy reproducing populations of sharks in aquariums," says Jen Wyffels, the paper's lead author who conducted the research for this paper with the South-East Zoo Alliance for Reproduction & Conservation and is currently a researcher at the University of Delaware.

"Moving whole animals from one aquarium to another to mate is expensive and can be stressful for the animal, but now we can just just move genes around through sperm," says Kevin Feldheim, a researcher at Chicago's Field Museum and a co-author of the study who led the DNA analysis of the newborn sharks to determine their parentage.

Figuring out shark parentage can be tricky because shark reproduction isn't always straightforward. In some species, female sharks can store sperm for months after mating and they use it for fertilization "on demand", so the father of a newborn shark isn't necessarily the male the mother most recently had contact with. Some female sharks are even capable of reproducing with no male at all, a process called parthenogenesis. In parthenogenesis, the female's egg cells are able to combine with each other, creating an embryo that only contains genetic material from the mother.

To study shark reproduction, the researchers focused on whitespotted bamboo sharks. "When people think of sharks, they picture great whites, tiger sharks, and bull sharks--the big, scary, charismatic ones," says Feldheim. "Whitespotted bamboo sharks are tiny, about three feet long. If you go to an aquarium, they're generally just resting on the bottom." But while bamboo sharks' gentleness and small size make them unlikely candidates for Hollywood fame, those qualities make them ideal for researchers to try to artificially inseminate.

Before attempting artificial insemination, researchers have to make sure that the potential mothers aren't already carrying sperm from a previous rendezvous. "Candidate females are isolated from males and the eggs they lay afterwards are monitored to make sure they are infertile," says Wyffels. Egg-laying sharks regularly lay eggs on a regular schedule, much like chickens, says Wyffels, to the point that they're nicknamed "chickens of the sea." To determine if the eggs are infertile, scientists shine an underwater light through the leathery, rectangular egg cases (called "mermaid's purses") to see if there's a wriggling embryo on top of the yolk. If there are no fertilized eggs for six weeks or more, the shark is ready to be inseminated.

Scientists collected and evaluated 82 semen samples from 19 sharks in order to tell the difference between good and bad samples. Some of the good samples went to nearby females for insemination, while others were kept cold and shipped around and across the country. Once the semen reached Ripley's Aquarium of the Smokies or Aquarium of the Pacific, where a female was waiting, researchers sedated her and placed the semen in her reproductive tract--the procedure took less than ten minutes. All in all, 20 females were inseminated as part of the study.

Baby sharks hatched from fertilized eggs after 4 months of incubation. "The hatchlings are about the size of your hand, and they have distinctive spot patterns that help to tell them apart," says Wyffels. Tissue samples were taken from all the babies, along with their parents, so Feldheim could analyze their DNA at the Field Museum's Pritzker Laboratory for Molecular Systematics and Evolution.

Feldheim developed a suite of genetic markers to determine parentage. "We sequenced the DNA and found sections where the code repeats itself," says Feldheim. "These repeating bits of code serve as signatures, and when we see them in the babies, we match them up to the potential dads." The team found that freshly collected semen was effective in fertilizing eggs in 27.6% of cases; semen that had been cold-stored for 24 or 48 hours had 28.1% and 7.1% success rates, respectively. In the genetic analysis of the offspring, the team also found two instances of parthenogenesis, where the mother reproduced on her own without using the sperm she'd been inseminated with. "These cases of parthenogenesis were unexpected and help illustrate how little we know about the basic mechanisms of sexual reproduction and embryo development among sharks," says Wyffels.

From these preliminary results, the scientists hope to help aquariums expand and manage their shark breeding programs. "There have been other reports on artificial insemination of sharks, but they include very few females. In this study, we're in the double digits and as a result we could investigate different methods for preparing and preserving sperm for insemination" says Wyffels. "And a hatchling from shark parents that live almost 3,000 miles apart from sperm collected days in advance, that's definitely a first."

"One of the goals of this pilot project was to just see if it worked," says Feldheim. "Now, we can extend it to other animals that actually need help breeding, from other species in aquariums to sharks under threat in the wild."

The researchers also note that if studies like these contribute to the conservation of sharks in the wild, it will be largely thanks to aquariums. "We wouldn't know about parthenogenesis in sharks if it wasn't for aquariums," says Feldheim.

"Aquariums allow you to observe the same individual animals over time, and that's very difficult to do in the wild," says Wyffels. "Aquarists have eyes on their animals every day. They pick up on subtle changes in behavior related to reproduction, and they tell us what they see. Research like this depends on that collaboration. We are already taking what we learned from this study and applying it to other species, especially the sand tiger shark, a protected species that does not reproduce often in aquariums."

This study was led by researchers from the South-East Zoo Alliance for Reproduction & Conservation in collaboration with, the Aquarium of the Pacific, Ripley's Aquarium of the Smokies, The Florida Aquarium, Adventure Aquarium and the Field Museum. 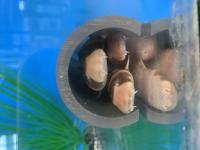