NASA is making sure the next generation of high school graduates understand the variety of career paths that can lead to missions exploring space. In fact, hundreds of students are already helping NASA's astronauts live and work aboard the International Space Station - the orbiting research platform making discoveries that benefit Earth while developing the technology that will allow humans to live and work in deep space.

For more than 50 years, NASA has sponsored programs to get students interested in the aerospace industry. This involves extensive outreach efforts, finding and developing the next generation of scientists and explorers to help humans reach the stars. This also includes students who decide to work in more hands-on technical fields and even the culinary arts.

The HUNCH program -- High Schools United with NASA to Create Hardware -- shows high school students the many ways they can put their talents to work for NASA, beyond the role of astronaut. The program provides students a hands-on experience with the space agency -- building NASA-designed parts for use by agency personnel.

"When we started this program 14 years ago, we had two main goals," said Bob Zeek, HUNCH co-founder and program manager at NASA's Marshall Space Flight Center in Huntsville, Alabama. "We needed full-size models of actual space station flight hardware to train ground support personnel. And we wanted to get kids who are good at machining, welding or other technical skills involved with NASA. All the things we do in HUNCH are preparing these students for the future and helping NASA at the same time."

The program started with three schools in two states. Now 117 student classrooms in 26 states participate, helping build NASA's future as well as their own. The HUNCH team also joined forces with the SME Education Foundation to help encourage students pursuing engineering and technology degrees. The foundation is a network of manufacturing professionals, researchers, educators and students working to connect and share knowledge and experience through mentoring, internships and job-shadowing. HUNCH and SME's Partnership Response in Manufacturing Education (PRIME) program is a new collaboration to introduce more high school students to career opportunities in the aerospace industry.

While students have used machining and welding skills to build exact replicas of hardware used on the space station, the program has expanded beyond manufacturing training fixtures. HUNCH has created programs for students to learn about computer-aided design, welding technology, graphic arts and even sewing. Select schools are building actual flight hardware. A student-built locker was recently delivered by the 10th SpaceX cargo resupply mission and installed on the station.

Here are some of the recent projects completed by HUNCH student teams:

"This is one of those programs that benefits the agency and the students," said Glenn Johnson, HUNCH design engineer at NASA's Johnson Space Center in Houston. "Students gain valuable working skills creating tangible products that meet a real need for NASA."

For more challenges, including ways students can be a part of the HUNCH program, visit the HUNCH website: https://www.nasahunch.com/

For a complete listing of active projects, visit the HUNCH design and prototype site: http://hunchdesign.weebly.com/.

NASA engages the next generation with HUNCH 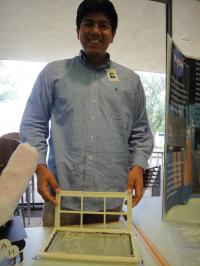 Students from the Huntsville Center for Technology