A study of barn owls published in JNeurosci suggests the visual systems of humans and birds may be more similar than previously thought.

The ability to perceive an object as distinct from a background is crucial for species that rely on vision to act on their environment. One way humans achieve this is by grouping different elements of a scene into "perceptual wholes" based on the similarity of their motion. This phenomenon has been mostly studied in primates, leaving open the question of whether such perceptual grouping represents a fundamental property of visual systems in general.

Yoram Gutfreund and colleagues addressed this question by studying the brain and behavior of barn owls as the animals tracked dark dots on a gray background presented on a computer screen. A wireless "Owl-Cam" tracked the owls' visual search behavior in one set of experiments while neural activity in the optic tectum -- the main visual processor in non-mammalian vertebrates -- was recorded in another. The researchers indeed report evidence of perceptual grouping in the owl, suggesting that this ability evolved and was conserved across species prior to the development of the human neocortex.

Owls see as humans do 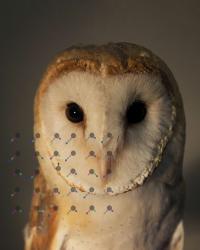 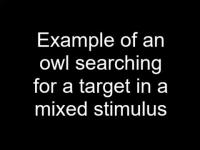