To the lengthy list of serendipitous discoveries – gravity, penicillin, the New World – add this: Scientists with the U.S. Department of Energy (DOE)'s Lawrence Berkeley National Laboratory (Berkeley Lab) have discovered why a promising technique for making quantum dots and nanorods has so far been a disappointment. Better still, they've also discovered how to correct the problem.

A team of researchers led by chemist Paul Alivisatos, director of Berkeley Lab, and Prashant Jain, a chemist now with the University of Illinois, has discovered why nanocrystals made from multiple components in solution via the exchange of cations (positive ions) have been poor light emitters. The problem, they found, stems from impurities in the final product. The team also demonstrated that these impurities can be removed through heat.

"By heating these nanocrystals to 100 degrees Celsius, we were able to remove the impurities and increase their luminescence by 400-fold within 30 hours," says Jain, a member of Alivisatos' research group when this work was done. "When the impurities were removed the optoelectronic properties of nanocrystals made through cation-exchange were comparable in quality to dots and nanorods conventionally synthesized."

Says Alivisatos, "With our new findings, the cation-exchange technique really becomes a method that can be widely used to make novel high optoelectronic grade nanocrystals."

Jain is the lead author and Alivisatos the corresponding author of a paper describing this work in the journal Angewandte Chemie titled "Highly Luminescent Nanocrystals From Removal of Impurity Atoms Residual From Ion Exchange Synthesis." Other authors were Brandon Beberwyck, Lam-Kiu Fong and Mark Polking.

Quantum dots and nanorods are light-emitting semiconductor nanocrystals that have a broad range of applications, including bio-imaging, solar energy and display screen technologies. Typically, these nanocrystals are synthesized from colloids - particles suspended in solution. As an alternative, Alivisatos and his research group developed a new solution-based synthesis technique in which nanocrystals are chemically transformed by exchanging or replacing all of the cations in the crystal lattice with another type of cation. This cation-exchange technique makes it possible to produce new types of core/shell nanocrystals that are inaccessible through conventional synthesis. Core/shell nanocrystals are heterostructures in which one type of semiconductor is enclosed within another, for example, a cadmium selenide (CdSe) core and a cadmium sulfide (CdS) shell.

"While holding promise for the simple and inexpensive fabrication of multicomponent nanocrystals, the cation-exchange technique has yielded quantum dots and nanorods that perform poorly in optical and electronic devices," says Alivisatos, a world authority on nanocrystal synthesis who holds a joint appointment with the University of California (UC) Berkeley, where he is the Larry and Diane Bock professor of Nanotechnology.

As Jain tells the story, he was in the process of disposing of CdSe/CuS nanocrystals in solution that were six months old when out of habit he tested the nanocrystals under ultraviolet light. To his surprise he observed significant luminescence. Subsequent spectral measurements and comparing the new data to the old showed that the luminescence of the nanocrystals had increased by at least sevenfold.

"It was an accidental finding and very exciting," Jain says, "but since no one wants to wait six months for their samples to become high quality I decided to heat the nanocrystals to speed up whatever process was causing their luminescence to increase."

Jain and the team suspected and subsequent study confirmed that impurities – original cations that end up being left behind in the crystal lattice during the exchange process - were the culprit.

"Even a few cation impurities in a nanocrystal are enough to be effective at trapping useful, energetic charge-carriers," Jain says. "In most quantum dots or nanorods, charge-carriers are delocalized over the entire nanocrystal, making it easy for them to find impurities, no matter how few there might be, within the nanocrystal. By heating the solution to remove these impurities and shut off this impurity-mediated trapping, we give the charge-carriers enough time to radiatively combine and thereby boost luminescence."

Since charge-carriers are also instrumental in electronic transport, photovoltaic performance, and photocatalytic processes, Jain says that shutting off impurity-mediated trapping should also boost these optoelectronic properties in nanocrystals synthesized via the cation-exchange technique. 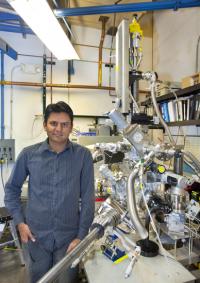