PORTLAND, Ore.--New insights have been gained about stellar winds, streams of high-speed charged particles called plasma that blow through interstellar space. These winds, created by eruptions from stars or stellar explosions, carry with them strong magnetic fields which can interact with or effect other magnetic fields, such as those that surround planets like Earth. Our own sun produces such a stellar wind called the solar wind which blows plasma out into the solar system at speeds of millions of miles per hour. This solar wind is responsible for producing "space weather"--a major hazard for satellites and spacecraft as well as for electrical grids on Earth. To understand these processes, researchers are employing laboratory experiments to study magnetic flows up close. Scientists from two laboratories, funded by the Department of Energy, will be presenting their work at the American Physical Society Division of Plasma Physics meeting in Portland, Ore.

At the MAGPIE laboratory of Imperial College London, experiments use an intense pulse of electricity to explode thin wires that form plumes of charged particles moving faster than the speed of sound. The particles are directed onto targets that have magnetic fields, which simulates the interaction of the solar wind with planets such as Earth, Jupiter or Saturn (Figure 1).

"The collision of solar wind with a planet's magnetic field can produce a region of space with extra hot, extra dense charged gas called the magnetopause, as well as an area of low pressure just behind it, analogous to how one might stand behind a windbreaker during an intense gale," said Lee Suttle, a scientist at Imperial College London. Most recently, researchers at the MAGPIE laboratory have been able to reproduce some of the important features of this collision in the laboratory.

A different laboratory study uses high-power lasers to study stellar winds produced by the universe's most energetic objects, such as active galactic nuclei and pulsars. By focusing a laser onto a small area of a metal, electrons are heated to energies so high that they move at speeds close to the speed of light (Figure 2).

"The electrons expand in a disc along the foil surface, generating huge magnetic fields," said Louise Willingale, the leader of the study at the University of Michigan. The energy in this magnetic field is so extreme that it is larger than the energy stored in the mass of all the electrons combined (given by the famous formula E=mc2 where E is energy, m is the electron mass and c is the speed of light).

A single laser pulse can create plasma with magnetic fields that point in one direction. A second pulse can create plasma with fields pointing in the opposite direction. When these two plasmas are forced together, the opposing fields create a tremendous amount of tension. The plasmas relieve this tension by undergoing magnetic reconnection: the oppositely directed magnetic fields release their energy with a large explosion. The magnetic reconnection region appears in the experiment as a bright region of X-rays.

A stellar achievement: Magnetized space winds in the laboratory 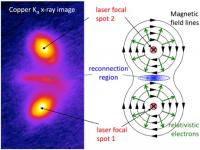 An Illustration of the Magnetic Field Geometry