Electricity is something we rarely think about -- we expect it to be there, flowing hundreds of feet over our heads, powering every facet of our daily lives.

But what if we didn’t have giant towering power lines above us and instead the electricity flowed under our feet?

Engineers in the Statler College of Engineering and Mineral Resources at West Virginia University have figured out exactly how to make this a reality.

John Hu, Statler chair professor in the Department of Chemical and Biomedical Engineering, alongside Debangsu Bhattacharyya, professor of chemical engineering, have created a liquid form of electricity that can be transported from coast to coast using existing infrastructure.

The carbon-neutral energy source has the potential to not only improve American economic and energy security, but reduce carbon dioxide emissions as well, Hu explained.

By taking advantage of the un-utilized, “stranded” electricity from solar and wind farms, the researchers successfully converted electricity into ammonia, a liquid energy carrier.

“Once you turn electricity into liquid ammonia you can basically either sell it as fertilizer or generate electricity again. The key is that because ammonia is a liquid you can ship it from coast to coast using the pipelines, railways or by truck,” Hu said.

Electricity generated from solar and wind farms are only as reliable as the amount of sun shining or wind blowing in the area at a given time.

As states along the West Coast begin their transformation towards clean and renewable energy, they must determine the best way to manage the time lag between production of electricity by solar and wind farms, and its demand by people.

The carbon-neutral fuel created can be stored for extended periods of time and is more easily and inexpensively transported, so it can be delivered and distributed more efficiently. That means these fuels offer a unique opportunity to reduce both the need for energy imports and carbon emissions from the transportation sector.

The modern industrial ammonia production uses the Haber-Bosch process, a century-old method that changed the agriculture industry and was a major contributor to the growth of the global population. The Haber-Bosch process requires huge capital and energy investment, which means it is only economical at large scales. The innovative approach of WVU’s research team will use low temperatures and pressure, resulting in the production of ammonia at small modular scale with higher profitability than the Haber-Bosch process.

“The success of the technology development can benefit not only the ammonia industry, but also other industries where small-scale distributed production mode is required,” Hu said.

Hu has received $1.65 million in funding over two years to build on the accomplishments of the Phase I project from the United States Department of Energy’s Advanced Research Project Agency-Energy.

WVU received Phase I of the award from ARPA-E’s Renewable Energy to Fuels through Utilization of Energy-Dense Liquids program in spring 2017. REFUEL projects aim to accelerate the shift to domestically-produced transportation fuels.

The project is being supported by the WVU Center for Innovation in Gas Utilization in Research, the National Energy Technology Laboratory, Shell and Malachite Technologies Inc. 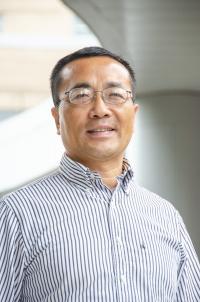