A field study published in JNeurosci of tropical fish in Central America reveals how the animals use electric fields to communicate in their natural habitat to accomplish coordinated behaviors including mating and reproduction.

The communication system of weakly electric ghost knifefish (Apteronotidae) has been previously studied in laboratory experiments. Taking a more naturalistic approach, Jan Benda,Jörg Henninger and colleagues recorded electric fields emitted by Apteronotus rostratus in a stream in the Panamanian rainforest, which enabled the researchers to study individual social interaction in detail. The researchers discovered that the signals were markedly different in their natural context than those from previous studies in the lab. They found that brief electric "chirps" were used to attract mates while a special long chirp was used by females to signal males to fertilize their eggs. Previous electrophysiological studies have not addressed key features of the observed natural sensory stimuli, highlighting the need to study behavior and sensory scenes in the natural environment. 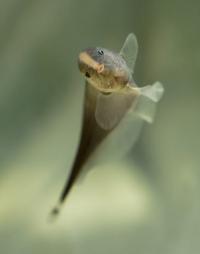