With unprecedented biodiversity loss occurring, we must determine how many species we share the planet with. This can start in our backyards, but speed is critical. A new study shows how biodiversity inventories can be accelerated with DNA barcoding and rapid publishing techniques, making it possible to survey a nature reserve in just four months. The final inventory of 3,500 species was written, released and published in the Biodiversity Data Journal in under one week.

To assess how quickly and effectively DNA barcoding could aid in quantifying biodiversity on a massive scale, the Biodiversity Institute of Ontario partnered with the rare Charitable Research Reserve, a 365+ hectare land reserve located in Ontario, Canada, in an attempt to expand the reserve's existing species inventory list. To complement this speed in surveying, the two partners also used cutting edge tools and venues for data release and publishing to rapidly disseminate the results.

Surveys of different habitats on the reserve were conducted over four months and culminated in a bioblitz, at which point delegates of the 6th International Barcode of Life Conference joined the effort. "These experts possess invaluable skills that enabled us to identify so many species," Angela Telfer, University of Guelph, comments in hindsight. "It was a great chance to marry barcoding data with taxonomic data and further our efforts to build a DNA barcode reference library."

The use of DNA barcoding to conduct this inventory greatly improved the speed at which the results were made available to the public. For the 3,502 specimens barcoded from the bioblitz, the data were generated at an impressive time scale - samples went through lysis, DNA extraction and PCR, sequencing and validation within 72 hours of their collection. Using the BOLD barcode reference library, taxonomy was applied and these results were uploaded to the Global Biodiversity Information Facility (GBIF) via Canadensys within 96 hours of their collection.

Even the choice of journal for publication contributed to the rapid process. The manuscript preparation and submission took considerably less time due to the online writing platform and pre-submission peer-review offered by the Biodiversity Data Journal, used for the first time in this survey. This allowed the 100+ co-authors of this study to all provide input, and reviewers were able to discuss and comment on the paper during the authoring process. All data are now publicly accessible, through the journal article and the various repositories above, and all specimens have been deposited in the Biodiversity Institute of Ontario's natural history collection and herbarium.

Over the span of four months, the two-staged survey produced a total of 28,916 specimens barcoded or observed across 14 phyla, 29 classes, 117 orders, and 531 families of animals, plants, fungi and lichens. A total of 1,102 species were recorded for the first time for the nature reserve, expanding its existing inventory by 49%.

The results from this mass data collection uncovered abundant biodiversity in taxa that were previously understudied. For example, there were no previous records of spiders at the reserve, but the team's efforts added an impressive 181 species to the inventory list, three of which were new to the province.

"The survey at rare Charitable Research Reserve is unique to other studies in that within four months - plus a single day of a concentrated bioblitz - more than 25,000 specimens and 3,500 species were recovered, often by non-experts," explains Connor Warne, a co-author on the paper and specialist in ants. "This model of assessment has the potential to revolutionize the way we uncover diversity in our world. With a coordinated effort, we could implement this model in parks, conservation areas and reserves across the world and take a much needed step in filling in the blank pages of the story of life on earth."

The four-letter code: How DNA barcoding can accelerate biodiversity inventories 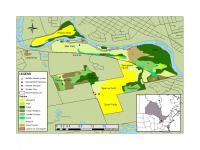