Bumblebees can be trained to score goals using a mini-ball, revealing unprecedented learning abilities, according to scientists at Queen Mary University of London (QMUL).

Their study, published in the journal Science, suggests that species whose lifestyle demands advanced learning abilities could learn entirely new behaviours if there is ecological pressure.

Project supervisor and co-author Professor Lars Chittka from QMUL's School of Biological and Chemical Sciences, said: "Our study puts the final nail in the coffin of the idea that small brains constrain insects to have limited behavioural flexibility and only simple learning abilities."

Previous research has shown that bumblebees could solve a range of cognitive tasks, but these have so far resembled tasks similar to the bees' natural foraging routines, such as pulling strings to obtain food.

This study examines bees' behavioral flexibility to carry out tasks that are not naturally encountered by the insects.

"We wanted to explore the cognitive limits of bumblebees by testing whether they could use a non-natural object in a task likely never encountered before by any individual in the evolutionary history of bees," said Dr Clint Perry, joint lead author and also from QMUL's School of Biological and Chemical Sciences.

To learn the technique, the bees were trained under one of three conditions: some observed a previously trained bee move the furthest ball to the centre to gain reward, others received a "ghost" demonstration, where a magnet hidden underneath the platform was used to move the ball, and a third group received no demonstration, where they found the ball already at the centre of the platform with reward.

The bees that observed the technique from a live or model demonstrator learned the task more efficiently than those observing a "ghost" demonstration or without demonstration.

Joint lead author Dr Olli J. Loukola, said: "The bees solved the task in a different way than what was demonstrated, suggesting that observer bees did not simply copy what they saw, but improved on it. This shows an impressive amount of cognitive flexibility, especially for an insect."

During the demonstrations, the researchers placed three yellow balls at varying distances from the centre. The "demonstrator" bees always moved the furthest ball to the centre, and always from the same spatial location, since they had been trained under conditions where the closer balls were immobile. Untrained bees were given three opportunities to watch a skilled bee perform the task in this manner.

In later tests, when these untrained bees were tested without the presence of a skilled demonstrator, bees moved the closest ball instead of the furthest ball, which they had seen the demonstrator moving. In another experiment, the bees also used a differently coloured ball than previously encountered.

Dr Loukola added: "It may be that bumblebees, along with many other animals, have the cognitive capabilities to solve such complex tasks, but will only do so if environmental pressures are applied to necessitate such behaviours." 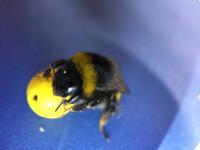 Bee Being Trained to Score a Goal