Far above the wildfires raging in Washington's forests, a less noticeable consequence of this dry year is taking place in mountain ponds. The minimal snowpack and long summer drought that have left the Pacific Northwest lowlands parched also affect the region's amphibians due to loss of mountain pond habitat.

According to a new paper published Sept. 2 in the open-access journal PLOS ONE, this summer's severe conditions may be the new normal within just a few decades.

"This year is an analog for the 2070s in terms of the conditions of the ponds in response to climate," said Se-Yeun Lee, research scientist at University of Washington's Climate Impacts Group and one of the lead authors of the study.

Current conditions provide a preview of how that will play out.

"We've seen that the lack of winter snowpack and high summer temperatures have resulted in massive breeding failures and the death of some adult frogs," said co-author Wendy Palen, an associate professor at Canada's Simon Fraser University who has for many years studied mountain amphibians in the Pacific Northwest. "More years like 2015 do not bode well for the frogs."

Mountain ponds are oases in the otherwise harsh alpine environment. Brilliant green patches amid the rocks and heather, the ponds are breeding grounds for Cascades frogs, toads, newts and several other salamanders, and watering holes for species ranging from shrews to mountain lions. They are also the cafeterias of the alpine for birds, snakes and mammals that feed on the invertebrates and amphibians that breed in high-altitude ponds.

The authors developed a new model that forecasts changes to four different types of these ecosystems: ephemeral, intermediate, perennial and permanent wetlands. Results showed that climate-induced reductions in snowpack, increased evaporation rates, longer summer droughts and other factors will likely lead to the loss or rapid drying of many of these small but ecologically important wetlands.

According to the study, more than half of the intermediate wetlands are projected to convert to fast-drying ephemeral wetlands by the year 2080. These most vulnerable ponds are the same ones that now provide the best habitat for frogs and salamanders.

At risk are unique species such as the Cascades frog, which is currently being evaluated for listing under the Endangered Species Act. Found only at high elevations in Washington, Oregon and California, Cascades frogs can live for more than 20 years and can survive under tens of feet of snow. During the mating season, just after ponds thaw, the males make chuckling sounds to attract females.

"They are the natural jesters of the alpine, incredibly tough but incredibly funny and charismatic," said Maureen Ryan, the other lead author, a former UW postdoctoral researcher who is now a senior scientist with Conservation Science Partners.

The team adapted methods developed for forecasting the effects of climate change on mountain streams. Wetlands usually receive little attention since they are smaller and often out of sight. Yet despite their hidden nature, ponds and wetlands are globally important ecosystems that help store water and carbon, filter pollution, convert nutrients and provide food and habitat to a huge range of migratory and resident species. Their sheer numbers -- in the tens of thousands across the Pacific Northwest mountain ranges -- make them ecologically significant.

"It's hard to truly quantify the effects of losing these ponds because they provide so many services and resources to so many species, including us," Ryan said. "Many people have predicted that they are especially vulnerable to climate change. Our study shows that these concerns are warranted."

Land managers can use the study's maps to prepare for climate change. For example, Ryan and co-authors are working with North Cascades National Park, where park biologists are using the wetland projections to evaluate and update priorities for managing introduced fish and restoring natural alpine lake habitat.

Other co-authors are professor Joshua Lawler and doctoral student Meghan Halabisky, both in the UW's School of Environmental and Forest Sciences, and Alan Hamlet at the University of Notre Dame. All co-authors are members of a multi-institutional group studying wetlands adaptation and conservation in the face of climate change that produced a report for the Northwest Climate Science Center and a research brief for Mount Rainier National Park. 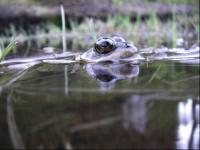