By presenting a new interpretation of a Maya hieroglyphic verb, Gerardo Aldana, associate professor of Chicana and Chicano Studies at UC Santa Barbara, has revised the understanding of one of the longest-studied texts in Maya archaeology. Aldana's research appears in his new book, "Tying Headbands or Venus Appearing: New Translations of k'al, the Dresden Codex Venus Pages and Classic Period Royal 'Binding' Rituals" (Archaeopress, 2011).

According to Aldana, at the end of the 19th century, the German philologist Ernst Förstemann discovered the basis of the modern interpretation of a Venus table in the 13th-century Maya manuscript known as the Dresden Codex. The six-page Venus table is an almanac dedicated to tracking the observable phases of the planet Venus. Förstemann's interpretation laid the groundwork for academic and popular 20th-century characterizations of the Maya as "obsessed" with astronomy and time. While scholars have added to his interpretation over the next 100 years, all have followed the basic model resulting from his work.

In his new book, Aldana shows that "k'al," the main verb referring to Venus events in the Dresden Codex, has been misread. He argues that the verb refers to an "enclosing" of time and space, such as that found throughout the Postclassic Mesoamerican ritual activity. "The key to my argument is that previously recognized records are pictorial, graphically representing the 'cosmogram' that ties space and time together," Aldana said. "But I show that the Dresden Codex Venus Table records the same concept in hieroglyphic text –– the idea is the same in both cases, but represented by an image in the Aztec convention, and by hieroglyphic text according to Mayan sensibilities."

The new hieroglyphic reading is accompanied by a revision of the mathematics of the Venus Table, also departing from the 70-year-old tradition in the field, Aldana said. "Overall, the result shows a much greater coherence to Postclassic religion throughout Mesoamerica," he explained. "And while contact between the regions has never been in question –– the Venus pages in the Dresden Codex, for example, include the names of Aztec deities, modified so they could be written with Mayan hieroglyphs –– the new interpretation goes beyond the mere appropriation of 'gods' to the sharing of deeper religious concepts."

The revision is also tied to Aldana's recent work on the calendar correlation, the means of correlating dates on the ancient Maya calendar with those on the Gregorian –– or modern –– calendar. In his chapter, titled "The Maya Calendar Correlation Problem," which appeared in the book, "Calendar and Years II: Astronomy and Time in the Ancient and Medieval World" (Oxbow Books, 2010), he showed that the currently accepted correlation constant –– the GMT –– is incorrect. Based in part on astronomical events, the GMT is named for early Mayanists Joseph Goodman, Juan Martinez-Hernandez, and J. Eric S. Thompson. Each contributed to the calculation.

In "Tying Headbands or Venus Appearing," Aldana demonstrates the scholarly value of letting go of the GMT. Without the GMT, he argues, a new coherence is revealed between the architecture and hieroglyphic texts of Late Classic Copan and the material in the Postclassic Dresden Codex. "This interpretation shows that the same religious ideas of astronomy, calendrics, space, and time were held in the Classic period, through the Postclassic period, and into early Colonial times," he said. 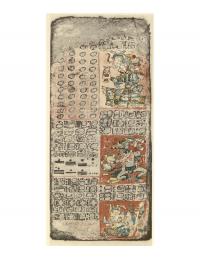 Page 46 of the Förstemann Version of the Dresden Codex