Why are gold deposits found at all? Gold is famously unreactive, and there seems to be little reason why gold should be concentrated, rather than uniformly scattered throughout the Earth's crust. Now an international group of geochemists have discovered why gold is concentrated alongside arsenic, explaining the formation of most gold deposits. This may also explain why many gold miners and others have been at risk from arsenic poisoning. This work is presented at the Goldschmidt conference, after recent publication*.

Gold has been prized for millennia, for its purity and stability. It's also rare enough to retain its value - the World Gold Council estimates that all the gold ever mined in the world would fit into a 20x20x20-meter cube. It is valued for its beauty, but also because it is one of the most inert metals in the whole Periodic Table, it doesn't easily react with other substances. So why should gold come together in sufficient quantity to mine - why are there gold deposits at all?

Some gold is found as gold nuggets, the stuff of prospectors' dreams, but an appreciable amount is bound up with minerals. Gold is known to be related to iron- and arsenic-containing minerals, such as pyrite and arsenopyrite. These minerals act sort of like a sponge, and are capable of concentrating gold up to a million times more than is found elsewhere in nature, such as in the hot spring waters that transport the gold. This gold becomes chemically bound in these minerals, so it is invisible to the naked eye.

The scientific team studied the action of the gold-concentrating minerals using the intense X-rays beam produced by the European Synchrotron (ESRF) at Grenoble in France, which can probe the chemical bonds between the mineral and gold.

"Our results show that arsenic drives the concentration of gold. This arsenic-driven gold pump explains how these iron sulfides can massively capture and then release gold, so controlling ore deposit formation and distribution. In practical terms, it means that it will make it easier to find new sources of gold and other precious metals, which bind to arsenic-containing iron sulfides. It may also open the door to controlling the chemical reactions, and if we can improve gold processing, we can recover more gold".

The new model identifies just why gold tends to be found with arsenic. Dr Pokrovski continued:

"It has been known for centuries that gold is found with arsenic, and this has caused severe health problems for gold miners. Now we know what happens at an atomic level, we can begin to see if there's anything we can do to prevent this".

The noxious link between arsenic and gold is well-known in France and elsewhere in the world, including at the Salsigne mine near Carcassonne. This was one of Western Europe's largest gold mines, and the world's largest arsenic producer at one time. It closed in 2004, but the environmental consequences of the arsenic pollution still persist in the region.

Dr. Jeffrey Hedenquist, University of Ottawa, commented that "Geologists as well as prospectors have long known that gold can be associated with arsenic-rich minerals, and over the past few decades others have quantified this association. The findings of Dr. Pokrovski and his team now help to explain why we see this association, caused by an atomic-scale attraction between gold and arsenic, with this marriage arranged by the structure of certain minerals."

This is an independent comment, Dr Hedenquist was not involved in this work.

Goldfinder: scientists discover why we can find gold at all 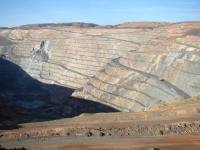