CHICAGO -- Scientists have discovered a new species of bat that has large flat adhesive organs, or suckers, attached to its thumbs and hind feet. This is a remarkable find because the new bat belongs to a Family of bats endemic to Madagascar--and one that was previously considered to include only one rare species. The new species, Myzopoda schliemanni, occurs only in the dry western forests of Madagascar, while the previously known species, Myzopoda aurita, occurs only in the humid eastern forests of Madagascar, according to new research recently published online in the journal Mammalian Biology. The new species is obviously different from the known species based on pelage coloration, external measurements and cranial characteristics, according to the researchers.

Myzopoda are often found in association with broad-leaf plants, most notably Ravenala madagascariensis or the Travelers' Palm, a plant that is endemic to Madagascar but has been introduced to numerous tropical countries. Myzopoda are found in association with such plants because they can use their suckers to climb and adhere to the leaves' flat, slick surface. They are presumed to roost in the leaves during the day.

Myzopoda were considered endangered because of their limited distribution and the notion that the family included only one species. The new research, however, modifies both of these ideas.

The researchers determined that Myzopoda is not endangered by the loss of the moist tropical forests because the bat appears to have adapted very well to the large broad-leaf Ravenala that are often pioneering plants in zones where the original forests have been cleared and burned.

"For now, we do not have to worry as much about the future of Myzopoda," said Steven M. Goodman, Field Museum field biologist and lead author of the study. "We can put conservation efforts on behalf of this bat on the backburner because it is able to live in areas that have been completely degraded, contrary to what is indicated or inferred in the current literature."

This underlines the importance of basic scientific research for establishing the priorities for conservation programs and assessments of presumed rare and possibly endangered animals, the study concludes.

Due to the physical similarities between M. schliemanni and M. aurita, the researchers concluded that one species probably evolved from the other, most likely after the bat dispersed across the island from east to west.

Bats are the last group of land mammals on Madagascar that have not been intensively studied, Goodman said. "Until a decade ago, these animals remained largely understudied. On the basis of recent surveys and taxonomic research, about one-third of the island's bat species were unknown to scientists until a few years ago, and the majority of these are new to science."

Only about eight percent of Madagascar's original forest cover remains, as the forests continue to be cleared by associated subsistence agricultural activities and to provide wood energy for urban zones. The island, which is found off the eastern coast of Africa, remains one of the most critically threatened areas in the world, in terms of biodiversity. Madagascar has a higher level of endemism (with plants and animals found nowhere else) than any other landmass in the world of comparable size. "Still today, you can go out and discover things in Madagascar that have never before been seen by scientists," Goodman said. "The sense of discovery is almost levitating."

Digital images available:
New species of sucker-footed bat (M. schliemanni) with open wings Ventral view of the holotype of Myzopoda schliemanni obtained in the Parc National d'Ankarafantsika in the western portion of Madagascar and recently described in Mammalian Biology. Previously, only one species in this endemic Malagasy Family of bats was known to science. Now there are two. Photo by Steven M. Goodman, Courtesy of The Field Museum

Sucker-footed bat (M. aurita) on leaf
Myzopoda schliemanni, a new species of bat recently discovered in Madagascar, uses large flat adhesive organs, or suckers, on its thumb and hind feet to climb and adhere to large broad leaves. This image of its closest relative, M. aurita, and the only other member of this Family of bats endemic to Madagascar, shows it capacity to adhere to smooth surface leaves. Photo by Merlin Tuttle, Bat Conservation International

Poorly known group of bats adapts to changes (profile of M. aurita)
Recently published research indicates that two species of Myzopodidae, a family of bats endemic to Madagascar, are not as endangered as previously thought. As shown in this image, Myzopoda aurita is able to adapt to broad-leaf plants that grow well in zones that have been completely or largely cleared of their original forest cover. This is good news for conservation. Photo by Merlin Tuttle, Bat Conservation International 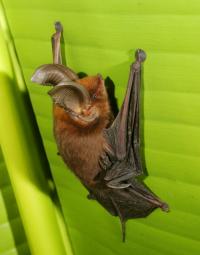 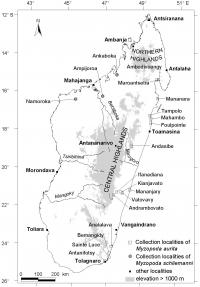