Scientists have peered inside the brain to show how taking DMT affects human consciousness by significantly altering the brain's electrical activity.

DMT (or dimethyltryptamine) is one of the main psychoactive constituents in ayahuasca, the psychedelic brew traditionally made from vines and leaves of the Amazon rainforest. The drink is typically prepared as part of a shamanic ceremony and associated with unusual and vivid visions or hallucinations.

The latest study is the first to show how the potent psychedelic changes our waking brain waves - with researchers comparing its powerful effects to 'dreaming while awake'.

The work, led by researchers from the Centre for Psychedelic Research at Imperial College London and published today in the journal Scientific Reports, may help to explain why people taking DMT and ayahuasca experience intense visual imagery and immersive 'waking-dream' like experiences.

DMT is a naturally occurring chemical found in miniscule amounts in the human brain but also in larger amounts in a number of plant species around the world.

Accounts from people who have taken DMT report intense visual hallucinations often accompanied by strong emotional experiences and even 'breakthroughs' into what users describe as an alternate reality or dimension.

But scientists are interested in using the powerful psychoactive compound for research as it produces relatively short but intense psychedelic experiences, providing a window for collecting data on brain activity when consciousness is profoundly altered.

In the latest study, the Imperial team captured EEG measures from healthy participants in a clinical setting, in a placebo-controlled design.

A total of 13 participants were given an intravenous infusion of DMT at the National Institute for Health Research (NIHR) Imperial Clinical Research Facility.

Volunteers were fitted with caps with electrodes to measure the brain's electrical activity, before, during and after their infusion, with the peak of the psychedelic experience lasting around 10 minutes.

Analysis revealed that DMT significantly altered electrical activity in the brain, characterised by a marked drop off in alpha waves - the human brain's dominant electrical rhythm when we are awake. They also found a short-lived increase in brainwaves typically associated with dreaming, namely, theta waves.

In addition to changes in the types of brainwaves, they also found that, overall, brain activity became more chaotic and less predictable - the opposite to what is seen in states of reduced consciousness, such as in deep sleep or under general anaesthesia.

"The changes in brain activity that accompany DMT are slightly different from what we see with other psychedelics, such as psilocybin or LSD, where we see mainly only reductions in brainwaves," said lead author Christopher Timmermann, from the Centre for Psychedelic Research.

"Here we saw an emergent rhythm that was present during the most intense part of the experience, suggesting an emerging order amidst the otherwise chaotic patterns of brain activity. From the altered brainwaves and participants' reports, it's clear these people are completely immersed in their experience - it's like daydreaming only far more vivid and immersive, it's like dreaming but with your eyes open."

Mr Timmermann explains that while it's unclear as to whether DMT may have any clinical potential at this stage, the group hopes to take the work further by delivering a continuous infusion of DMT to extend the window of the psychedelic experience and collect more data.

The team says future studies could include more sophisticated measurements of brain activity, such as fMRI, to show which regions and networks of the brain are affected by DMT. They believe the visual cortex, the large area towards the back of the brain, is likely to be involved.

Dr Robin Carhart-Harris, head of Centre for Psychedelic Research, said: "DMT is a particularly intriguing psychedelic. The visual vividness and depth of immersion produced by high-doses of the substance seems to be on a scale above what is reported with more widely studied psychedelics such as psilocybin or 'magic mushrooms'.

"It's hard to capture and communicate what it is like for people experiencing DMT but likening it to dreaming while awake or a near-death experience is useful.

"Our sense it that research with DMT may yield important insights into the relationship between brain activity and consciousness, and this small study is a first step along that road." 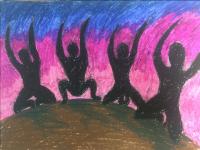 Sketch Drawn by Study Participant of Visuals during Their Experience 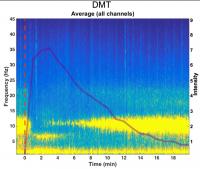 Brainwaves Measured by EEG During DMT