Two large, complex sunspots are moving across the face of the sun. One, which produced considerable solar activity in the past weeks, has almost rotated off completely. A new sunspot rounded into view on Nov. 11, 2013 and is now making its way across the Earth-side of the sun. An active region can contain one or more sunspots. The National Oceanic and Atmospheric Administration numbers active regions consecutively as they are observed on the sun.

Active region 1890 first appeared on Nov. 2, 2013, and is now almost out of view over the sun's right-hand horizon. It was the source for several mid-sized and significant flares while facing Earth. Its last significant flare, which occurred on Nov. 10, 2013, was classified as an X1.1-class flare.

What is a Solar Flare?

Solar flares are powerful bursts of radiation. Harmful radiation from a flare cannot pass through Earth's atmosphere to physically affect humans on the ground, however -- when intense enough -- they can disturb the atmosphere in the layer where GPS and communications signals travel.

Why This Uptick in Flares Now?

Increased numbers of flares are quite common at the moment, since the sun's normal 11-year activity cycle is ramping up toward solar maximum conditions. Humans have tracked this solar cycle continuously since it was discovered in 1843, and it is normal for there to be many flares a day during the sun's peak activity, called solar maximum. 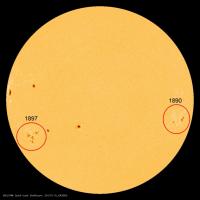 View of the Sun