A team led by KOH Gou Young, director of the Center for Vascular Research, within the Institute for Basic Science (IBS), in collaboration with Chungnam National University, clarified the molecular mechanism to explain how the thyroid and surrounding vascular system change in the most common form of hyperthyroidism. Published in the EMBO Molecular Medicine journal, these findings provide a potential therapeutic target for thyroid diseases.

The thyroid is a highly vascularized organ, found behind the Adam's apple. Some of the functions of the thyroid are regulated by a hormone, called thyrotropin, produced in the brain. Graves' disease, the most common cause of hyperthyroidism in the United States, affects both the thyroid and the surrounding vascular network. In this disease, the thyroid produces an excessive amount of hormones and the capillaries become denser. "Previous studies show that abnormalities in thyroid glands and surrounding vasculature are interconnected, we wanted to understand how this happens, at the molecular level," explains Koh.

Using animal models that simulate Graves' disease, IBS scientists uncovered the biological pathway contributing to this disorder. They found that the culprit is the vascular endothelial growth factor A (VEGF-A). This protein is involved in forming new vessels around the thyroid, and regulating the hormonal exchange happening between these vessels and the thyroid, through very small pores called fenestrae (from Latin 'window').

Upon stimulation with the thyrotropin hormone, VEGF-A is produced by the thyroid gland and as a result, the thyroid enlarges and the walls of the capillaries (constituted mainly by endothelial cells) increase the expression of VEGFR2, the receptor for VEGF-A.

Concurrently, the research team could also exclude other molecular pathways. For example, they found that the angiopoietin-Tie2 pathway, fundamental in other tissues like the eyes and brain, does not play a major role in remodeling the vasculature of the thyroid gland. Finally, VEGFR3 was ruled out from the indispensable pool of proteins that maintain thyroid vascular integrity.

A culprit of thyroid's diseases 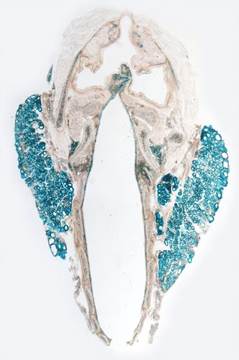 VEGF-A (Blue) in Follicular Cells of the Thyroid