Scientists have discovered extinct strains of smallpox in the teeth of Viking skeletons - proving for the first time that the killer disease plagued humanity for at least 1400 years.

Smallpox spread from person to person via infectious droplets, killed around a third of sufferers and left another third permanently scarred or blind. Around 300 million people died from it in the 20th century alone before it was officially eradicated in 1980 through a global vaccination effort - the first human disease to be wiped out.

Now an international team of scientists have sequenced the genomes of newly discovered strains of the virus after it was extracted from the teeth of Viking skeletons from sites across northern Europe. The findings have been published in Science today (JULY 23 2020).

He said: "We discovered new strains of smallpox in the teeth of Viking skeletons and found their genetic structure is different to the modern smallpox virus eradicated in the 20th century. We already knew Vikings were moving around Europe and beyond, and we now know they had smallpox. People travelling around the world quickly spread Covid-19 and it is likely Vikings spread smallpox. Just back then, they travelled by ship rather than by plane.

"The 1400-year-old genetic information extracted from these skeletons is hugely significant because it teaches us about the evolutionary history of the variola virus that caused smallpox."

Smallpox was eradicated throughout most of Europe and the United States by the beginning of the 20th century but remained endemic throughout Africa, Asia, and South America. The World Health Organisation launched an eradication programme in 1967 that included contact tracing and mass communication campaigns - all public health techniques that countries have been using to control today's coronavirus pandemic. But it was the global roll out of a vaccine that ultimately enabled scientists to stop smallpox in its tracks.

Historians believe smallpox may have existed since 10,000 BC but until now there was no scientific proof that the virus was present before the 17th century. It is not known how it first infected humans but, like Covid-19, it is believed to have come from animals.

Professor Martin Sikora, one of the senior authors leading the study, from the Centre for GeoGenetics, University of Copenhagen, said: "The timeline of the emergence of smallpox has always been unclear but by sequencing the earliest-known strain of the killer virus, we have proved for the first time that smallpox existed during the Viking Age.

"While we don't know for sure if these strains of smallpox were fatal and caused the death of the Vikings we sampled, they certainly died with smallpox in their bloodstream for us to be able to detect it up to 1400 years later. It is also highly probable there were epidemics earlier than our findings that scientists have yet to discover DNA evidence of."

The team of researchers found smallpox - caused by the variola virus - in 11 Viking-era burial sites in Denmark, Norway, Russia, and the UK. They also found it in multiple human remains from Öland, an island off the east coast of Sweden with a long history of trade. The team were able to reconstruct near-complete variola virus genomes for four of the samples.

Dr Lasse Vinner, one of the first authors and a virologist from The Lundbeck Foundation GeoGenetics Centre, said: "Understanding the genetic structure of this virus will potentially help virologists understand the evolution of this and other viruses and add to the bank of knowledge that helps scientists fight emerging viral diseases.

"The early version of smallpox was genetically closer in the pox family tree to animal poxviruses such as camelpox and taterapox, from gerbils. It does not exactly resemble modern smallpox which show that virus evolved. We don't know how the disease manifested itself in the Viking Age - it may have been different from those of the virulent modern strain which killed and disfigured hundreds of millions."

Dr Terry Jones, one of the senior authors leading the study, a computational biologist based at the Institute of Virology at Charité - Universitätsmedizin Berlin and the Centre for Pathogen Evolution at the University of Cambridge, said: "There are many mysteries around poxviruses. To find smallpox so genetically different in Vikings is truly remarkable. No one expected that these smallpox strains existed. It has long been believed that smallpox was in Western and Southern Europe regularly by 600 AD, around the beginning of our samples.

"We have proved that smallpox was also widespread in Northern Europe. Returning crusaders or other later events have been thought to have first brought smallpox to Europe, but such theories cannot be correct. While written accounts of disease are often ambiguous, our findings push the date of the confirmed existence of smallpox back by a thousand years."

Dr Barbara Mühlemann, one of the first authors and a computational biologist, took part in the research during her PhD at the Centre for Pathogen Evolution at the University of Cambridge, and is now also based at the Institute of Virology at Charité, said: “The ancient strains of smallpox have a very different pattern of active and inactive genes compared to the modern virus. There are multiple ways viruses may diverge and mutate into milder or more dangerous strains. This is a significant insight into the steps the variola virus took in the course of its evolution.”

Dr Jones added: "Knowledge from the past can protect us in the present. When an animal or plant goes extinct, it isn't coming back. But mutations can re-occur or revert and viruses can mutate or spill over from the animal reservoir so there will always be another zoonosis."

Zoonosis refers to an infectious disease outbreak caused by a pathogen jumping from a non-human animal to a human.

The research is part of a long-term project sequencing 5000 ancient human genomes and their associated pathogens made possible thanks to a scientific collaboration between The Lundbeck Foundation, The Wellcome Trust, The Nordic Foundation, and Illumina Inc.

Professor Willerslev concluded: "Smallpox was eradicated but another strain could spill over from the animal reservoir tomorrow. What we know in 2020 about viruses and pathogens that affect humans today, is just a small snapshot of what has plagued humans historically." 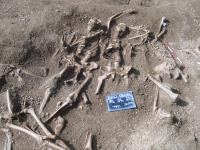