New research by the UK's University of Warwick and Hamilton College in the US into the happiness levels of a million individual US citizens have revealed their personal happiness levels closely correlate with earlier research that ranked the quality of life available in the US's 50 states plus the District of Columbia. This research provides a unique external validation of people's self reported levels of happiness and will be of great value to future economic and clinical research in this field.

The new research published in the journal Science on 17th December 2009 is by Professor Andrew Oswald of the UK's University of Warwick and Stephen Wu of Hamilton College in the US.

The researchers examined a 2005- 2008 Behavioral Risk Factor Surveillance System random sample of 1.3 million United States citizens in which Life-satisfaction in each U.S. state is measured. This provided a league table of happiness by US State reproduced below.

This is the first large scale analysis of happiness levels in the US but the researchers were content with simply having this large data set and ranking. They decided to use the data to try and resolve one of the most significant issues facing economists and clinical scientists carrying out research into happiness.

Researchers have to rely on people's self declared levels of happiness – not how can you rely on those self declarations. There have been useful studies trying to match those levels of happiness to clinical signs of happiness and stress such as blood pressure. That has been useful but one cannot know for sure whether those clinical signs are themselves driving happiness or whether the reverse is true. Researchers have longed for a more clearly external set of data to test their results.

On this occasion the researchers found another parallel data set that might for the first time provide that external validation or challenge their findings. They discovered research by Stuart Gabriel published in 2003 which considered objective indicators for each individual State of the USA such as: precipitation; temperature; wind speed; sunshine; coastal land; inland water; public land; National Parks; hazardous waste sites; environmental 'greenness'; commuting time; violent crime; air quality; student-teacher ratio; local taxes; local spending on education and highways; cost of living. This essentially allowed the creation of a rank order of US states showing which should provide the happiest living experience. This then was a truly external data set that could be used to check against the self declared levels of happiness

When the two tables were compared they found a very close correlation between people's subjective life-satisfaction scores and objectively estimated quality of life.

The lead researcher on the study, Professor Andrew Oswald from the University of Warwick said:

"The beauty of our statistical method is that we are able to look below the surface of American life -- to identify the deep patterns in people's underlying happiness from Alabama to Wyoming. This type of study has been done for a few European countries but it is new to the United States. We are the first to be able to do this calculation -- partly because we are fortunate enough to have a random anonymized sample of 1.3 million Americans."

"The state-by-state pattern seems interesting in itself. But it also matters scientifically. We wanted to study whether people's feelings of satisfaction with their own lives are reliable, that is, whether they match up to reality -- of sunshine hours, congestion, air quality, etc -- in their own state. And they do match. When human beings give you an answer on a numerical scale about how satisfied they are with their lives, it is best to pay attention. Their answers are reliable. This suggests that life-satisfaction survey data might be very useful for governments to use in the design of economic and social policies."

Professor Oswald expressed some caution in how the results should be interpreted for the state of Louisiana in the survey following the disruption caused by Hurricane Katrina but was confident that the data on the other states was a true reflection of happiness levels saying:

"We have been asked a lot whether we expected that states like New York and California would do so badly in the happiness ranking. Having visited and lived in various parts of the US, I am only a little surprised. Many people think these states would be marvellous places to live in. The problem is that if too many individuals think that way, they move into those states, and the resulting congestion and house prices make it a non-fulfilling prophecy. In a way, it is like the stock market. If everyone thinks it would be great to buy stock X, that stock is generally already overvalued. Bargains in life are usually found outside the spotlight. It may be that exactly the same is true of the best places to live."

Andrew Oswald/ Wu ranking of happiness levels by US State

Professor Oswald was able to conduct this research thanks to an ESRC Professorial Fellowships at the University of Warwick. These ESRC Professorial Fellowships are aimed at leading senior social scientists. These awards are intended to push back the frontiers of social science by allowing the UK's leading scholars the time and opportunity to carry out cutting edge research that will deepen our understanding of a number of critical social scientific questions in areas that will have an impact on the future of our society. The provision of salary support, research assistant support and the linking of the Fellowships with PhD studentships is designed to foster high quality and innovative advances in the social sciences. The Economic and Social Research Council (ESRC) is the UK 's largest organisation for funding research on economic and social issues. 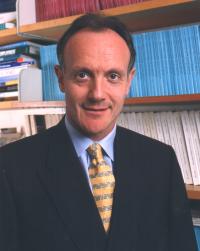