Despite being "neotropical-forest-loving creatures," some orchid bees are known to tolerate habitats disturbed by human activity. However, little did the research team of Paola Galgani-Barraza (Smithsonian Tropical Research Institute) expect to find as many as 120 clusters of nearly two-centuries-old orchid bee nests built on the altarpiece of the Basilica Cathedral in Casco Viejo (Panamá). Their findings are published in the open-access Journal of Hymenoptera Research.

This happened after restoration work, completed in 2018 in preparation for the consecration of a new altar by Pope Francis, revealed the nests. Interestingly, many cells were covered with gold leaf and other golden material applied during an earlier restoration following an 1870 fire, thus aiding the reliable determination of the age of the clusters. The cells were dated to the years prior to 1871-1876.

The bee species, that had once constructed the nests, was identified as the extremely secretive Eufriesea surinamensis. Females are known to build their nests distant from each other, making them very difficult to locate in the field. As a result, there is not much known about them: neither about the floral resources they collect for food, nor about the materials they use to build their nests, nor about the plants they pollinate.

However, by analysing the preserved pollen for the first time for this species, the researchers successfully detected the presence of 48 plant species, representing 43 genera and 23 families. Hence, they concluded that late-nineteenth century Panama City was surrounded by a patchwork of tropical forests, sufficient to sustain nesting populations of what today is a forest-dwelling species of bee.

Not only did the scientists unveil important knowledge about the biology of orchid bees and the local floral diversity in the 19th century, but they also began to uncover key information about the functions of natural ecosystems and their component species, where bees play a crucial role as primary pollinators. Thus, the researchers hope to reveal how these environments are being modified by collective human behaviour, which is especially crucial with the rapidly changing environment that we witness today.

Environs of the Eufriesea surinamensis Nesting Site in Casco Viejo, Panamá in 1875 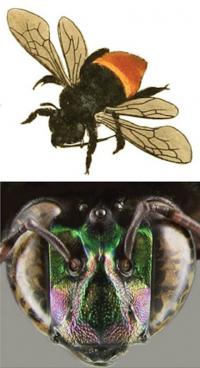