Thousands of Sri Lankans remain refugees five years after a long civil war, and satellite-image analysis seems to reveal many new housing-like structures and development in a military zone in the northern part of the country. However, the analysis also shows no significant increase in civic facilities despite government claims that it has seized the land for public use.

The analysis, completed by the nonprofit, nonpartisan American Association for the Advancement of Science (AAAS), suggests a sharp increase in the number of residential housing-type structures within the Valikamam High-Security Zone (HSZ), on Sri Lanka's Jaffna Peninsula. At the end of the civil war between government forces and the rebel Tamil Tigers, a satellite image from 2009 included 3,215 such buildings. By 2014, the number had jumped to 4,731, reported Susan Wolfinbarger, director of the Geospatial Technologies and Human Rights Project at AAAS.

Some 2,000 displaced civilians have petitioned to return to their homes on the Jaffna Peninsula. The petition is still waiting to be heard by a Sri Lankan high court, explained Fred Carver, campaign director at the Sri Lanka Campaign for Peace and Justice (SLC), which requested the satellite image analysis. A government order authorizing the military's acquisition of the HSZ region, encompassing 6,381 acres, or 25 square kilometers of land, states that the region is being used for a public purpose.

"The changes that we have seen in the satellite images happened within an area that is entirely controlled by the military," Wolfinbarger noted. "We have observed a dramatic expansion of housing-type structures as well as agricultural activity. The reasons for this are not clear."

"We don't know precisely what the land is being used for, but it doesn't seem, based on the AAAS analysis, to be consistent with the pledge to use the land for public purposes," Carver said. "It also doesn't seem as though all 25 square kilometers of the region is being used for a military base."

Eric Ashcroft, AAAS senior project coordinator, said: “Over the study period, most of the growth in structures occurred outside of potential public-service areas and consisted mostly of new house-like structures, which could indicate that the land is not being used for a public purpose.”

The AAAS analysis confirmed the existence of the ocean-front "Thalsewana Holiday Resort" within the military zone which touts itself online as "functioning under the Security Forces Headquarters." Another coastline development also was seen to the west of the resort, and AAAS researchers further identified a number of new and expanded or improved roads as well as increased land-use for farming.

"Human rights groups, like SLC, are concerned about the actions of the military in these areas, as they move toward using these 'military' areas for non-military activities, such as farming and resort tourism," the AAAS report notes.

The research, funded by the Oak Foundation, used satellite images obtained from DigitalGlobe and Airbus Defense and Space. Previously, AAAS satellite-image analysis of Sri Lanka's northeastern coast in 2009 revealed an estimated 342 new graves shortly after violence erupted there that spring.

The American Association for the Advancement of Science (AAAS) is the world's largest general scientific society and publisher of the journal Science as well as Science Translational Medicine and Science Signaling. AAAS was founded in 1848 and includes some 261 affiliated societies and academies of science, serving 10 million individuals. Science has the largest paid circulation of any peer-reviewed general science journal in the world, with an estimated total readership of 1 million. The non-profit AAAS is open to all and fulfills its mission to "advance science and serve society" through initiatives in science policy, international programs, science education, public engagement, and more. For the latest research news, log onto EurekAlert!, http://www.eurekalert.org, the premier science-news Web site, a service of AAAS. See http://www.aaas.org. 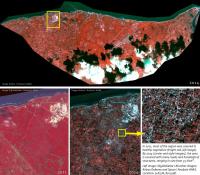 Development in the Western Portion of the Military Zone