An African rattan palm species has recently been assessed as Endangered, according to the IUCN Red List criteria. Although looking pretty robust at height of up to 40 m, the palm is restricted to scattered patches of land across an area of 40 km². It grows in reserves and conservation areas in Ghana and a single forest patch in Côte d'Ivoire. Its Species Conservation Profile is published in the open access Biodiversity Data Journal by an international research team, led by Thomas Couvreur, Institut de Recherche pour le Développement (IRD), France, in collaboration with the University of Yaoundé, Cameroon, Royal Botanic Gardens, Kew, UK, and the Conservatoire et jardin botaniques, Geneva, Switzerland.

The rattan palm is confined to moist evergreen forests with high rainfall, located at 100 to 200 meters above sea level. The species is poorly known, yet it is likely very rare judging from the limited amount of forest habitat remaining across its range. Furthermore, the known populations are isolated from each other by large distances, which makes them particularly vulnerable.

Even though there are gaps of knowledge concerning the rattan palm species, the research team conclude that it is most likely currently declining, due to habitat loss, fragmentation and over-harvesting. Often mistaken for a sister species, commonly used in trade, the stems of the endangered species are largely used in furniture production. When longitudinally split into ribbons, the canes are also used as ropes for thatching, for making baskets and sieves, and to make traps.

"As with most African rattan species, there is inadequate information on the international trade, but it is likely to be negligible," explain the scientists.

"Conservation measures are urgently needed to protect the habitat of this species and to control the unsustainable harvest of the stems. A promising solution might be sustainable cultivation of rattans to avoid the exploitation of wild populations," suggests Ariane Cosiaux (IRD), the lead author of the study currently based in Cameroon.

With their present paper, the authors make use of a specialised novel publication type feature, called Species Conservation Profile, created by Biodiversity Data Journal, to provide scholarly credit and citation for the IUCN Red List species page, as well as pinpoint the population trends and the reasons behind them. 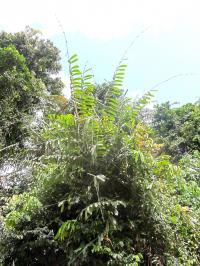