An expansion of wetlands and not a large-scale melting of frozen methane deposits is the likely cause of a spike in atmospheric methane gas that took place some 11,600 years ago, according to an international research team led by Scripps Institution of Oceanography at UC San Diego.

The finding is expected to come as a relief to scientists and climate watchers concerned that huge accelerations of global warming might have been touched off by methane melts in the past and could happen again now as the planet warms. By measuring the amount of carbon-14 isotopes in methane from air bubbles trapped in glacial ice, the researchers determined that the surge that took place nearly 12,000 years ago was more chemically consistent with an expansion of wetlands. Wetland regions, which produce large amounts of methane from bacterial breakdown of organic matter, are known to have spread during warming trends throughout history.

"This is good news for global warming because it suggests that methane clathrates do not respond to warming by releasing large amounts of methane into the atmosphere," said Vasilii Petrenko, a postdoctoral fellow at University of Colorado, Boulder, who led the analysis while a graduate student at Scripps.

The results appear in April 24 editions of the journal Science.

Scientists had long been concerned about the potential for present-day climate change to cause a thawing of Arctic permafrost and a warming of ocean waters great enough to trigger a huge release of methane that would send planetary warming into overdrive. Vast amounts of methane are sequestered in solid form, known as methane clathrate, in seafloor deposits and in permafrost. Cold temperatures and the intense pressure of the deep ocean stabilize the methane clathrate masses and keep methane from entering the atmosphere.

Scientists have estimated that a melting of only 10 percent of the world's clathrate deposits would create a greenhouse effect equal to a tenfold increase in the amount of carbon dioxide in the atmosphere. For comparison, the warming trend observed in the last century has taken place with only a 30 percent increase of atmospheric carbon dioxide.

The research team, overseen by Scripps geoscientist and study co-author Jeff Severinghaus, collected what may be the largest ice samples ever for a climate change study. The researchers cut away 15 tons of ice from a site called Pakitsoq at the western margin of the Greenland ice sheet to collect the ancient air trapped within. Methane exists in low concentrations in this air and only a trillionth of any given amount contains the carbon-14 isotope that the researchers needed to perform the analysis. Levels of carbon-14, which has a half-life of 5,730 years, were too high in the methane to have come from clathrates, the researchers concluded.

"This study is important because it confirms that wetlands and moisture availability change dramatically along with abrupt climate change," said Severinghaus. "This highlights in a general way the fact that the largest impacts of future climate change may be on water resources and drought, rather than temperature per se."

The burst of methane took place immediately after an abrupt transition between climatic periods known as the Younger Dryas and Preboreal. During this event, temperatures in Greenland rose 10° C (18° F) in 20 years. Methane levels over 150 years rose about 50 percent, from 500 parts per billion in air to 750 parts per billion.

In addition to Petrenko and Severinghaus, researchers from the Australian Nuclear Science and Technology Organisation (ANSTO), Oregon State University, the National Institute of Water and Atmospheric Research in New Zealand, the Technical University of Denmark and the Commonwealth Scientific and Industrial Research Organisation in Australia contributed to the report.

The work was supported by grants from the National Science Foundation, the Packard Foundation, the American Chemical Society, the ANSTO Cosmogenic Climate Archives of the Southern Hemisphere project and the New Zealand Foundation of Science and Technology. 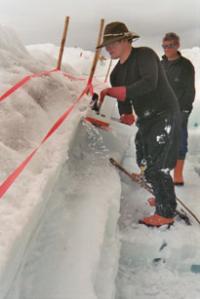