When it comes to microelectronics, there is one chemical element like no other: silicon, the workhorse of the transistor technology that drives our information society. The countless electronic devices we use in everyday life are a testament to how today very high volumes of silicon-based components can be produced at very low cost. It seems natural, then, to use silicon also in other areas where the properties of semiconductors -- as silicon is one -- are exploited technologically, and to explore ways to integrate different functionalities. Of particular interest in this context are diode lasers, such as those employed in barcode scanners or laser pointers, which are typically based on gallium arsenide (GaAs). Unfortunately though, the physical processes that create light in GaAs do not work so well in silicon. It therefore remains an outstanding, and long-standing, goal to find an alternative route to realizing a 'laser on silicon'.

Writing today in Applied Physics Letters, an international team led by Professors Giacomo Scalari and Jérôme Faist from the Institute for Quantum Electronics present an important step towards such a device. They report electroluminescence -- electrical light generation -- from a semiconductor structure based on silicon-germanium (SiGe), a material that is compatible with standard fabrication processes used for silicon devices. Moreover, the emission they observed is in the terahertz frequency band, which sits between those of microwave electronics and infrared optics, and is of high current interest with a view to a variety of applications.

The main reason why silicon cannot be used directly for building a laser following to the GaAs template has to do with the different nature of their band gaps, which is direct in the latter but indirect in the former. In a nutshell, in GaAs electrons recombine with holes across the bandgap producing light; in silicon, they produce heat. Laser action in silicon therefore requires another path. And exploring a fresh approach is what ETH doctoral researcher David Stark and his colleagues are doing. They work towards a silicon-based quantum cascade laser (QCL). QCLs achieve light emission not by electron-hole recombination across the bandgap, but by letting electrons tunnel through repeated stacks of precisely engineered semiconductor structures, during which process photons are emitted.

The QCL paradigm has been demonstrated in a number of materials -- for the first time in 1994 by a team including Jérôme Faist, then working at Bell Laboratories in the US -- but never in silicon-based ones, despite promising predictions. Turning these predictions into reality is the focus of an interdisciplinary project funded by the European Commission, bringing together a team of leading experts in growing highest-quality semiconductor materials (at the Università Roma Tre), characterising them (at the Leibniz-Institut für innovative Mikroelektronik in Frankfurt an der Oder) and fabricating them into devices (at the University of Glasgow). The ETH group of Scalari and Faist is responsible for performing the measurements on the devices, but also for the design of the laser, with numerical and theoretical support from partners in the company nextnano in Munich and at the Universities of Pisa and Rome.

From electroluminescence to lasing

With this bundled knowledge and expertise, the team designed and built devices with a unit structure made of SiGe and pure germanium (Ge), less than 100 nanometres in height, which repeats 51 times. From these heterostructures, fabricated with essentially atomically precision, Stark and co-workers detected electroluminescence, as predicted, with the spectral features of the emerging light agreeing well with calculations. Further confidence that the devices work as intended came from a comparison with a GaAs-based structure that was fabricated with identical device geometry. Whereas the emission from the Ge/SiGe structure is still significantly lower than for its GaAs-based counterpart, these results clearly signal that the team is on the right track. The next step will be now to assemble similar Ge/SiGe structures according to a laser design that the team developed. The ultimate goal is to reach room-temperature operation of a silicon-based QCL.

Such an achievement would be significant in several respects. Not only would it, at long last, realize a laser on a silicon substrate, thereby bringing a boost to silicon photonics. The emission of the structure created by Stark et al. is in the terahertz region, for which currently compact light sources are widely missing. Silicon-based QCLs, with their potential versatility and reduced fabrication cost, could be a boon for the large-scale use of terahertz radiation in existing and new fields of application, from medical imaging to wireless communication.

Lights on for silicon photonics 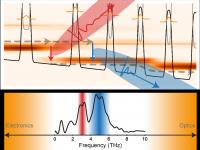 Schematic of light emission in a quantum cascade laser