Adult females and males in a newly identified genus of Latin American praying mantises have evolved sharply different camouflage strategies, according to a Cleveland Museum of Natural History-led study published in the journal ZooKeys.

Adult males of the new genus retain the stubby, stick-like body configuration and brown coloration they have used as nymphs, whereas adult females, whose bodies grow to be considerably larger to maximize egg production, transform their appearance to mimic a leaf. They change to green, while their forewings become larger and more rounded compared to the male's, with veins that simulate a leaf structure.

Although adult females are nearly two inches long, the members of this new mantis genus had escaped scientific recognition until recently, in part because the disparity in camouflage tactics made classification difficult.

This shrewdness inspired the name for the new mantis species: Hondurantemna chespiritoi. The genus name (Hondurantemna) derives from Honduras, where the first female specimen was found, in combination with Antemna, a Neotropical mantis to which the new lineage is closely related.

Meanwhile, the species name, chespiritoi, is a nod to the late Mexican comedian Roberto Gómez Bolaños, known as Chespirito, or Little Shakespeare. One of Bolaños' TV characters, a goofy superhero called the Red Grasshopper, was fond of saying "¡No contaban con mi astucia!" -- Spanish for "They didn't count on my cleverness!" -- when he defeated bad guys.

"The first male specimen of the new mantis species was from Mexico, like Bolaños," he explains. "And the signature line of Bolaños' Red Grasshopper character kind of reminded me of the fact that you had this pretty large species of praying mantis that no one had found for many years."

Adult female and male specimens of the mantis species were in separate museum collections in Paris, France and San Francisco, California, but had remained unidentified and their relationship unrecognized for more than two decades because of their dissimilar appearances.

Entomologist Julio Rivera, Ph.D., spotted the large green female mantis in the Muséum national d'Histoire naturelle, Paris and brought it to the attention of Cleveland Museum of Natural History Curator of Invertebrate Zoology Gavin Svenson, Ph.D., an international expert on praying mantises. Dr. Svenson later saw the small brown male mantis in the California Academy of Sciences and noted that the two insects, though dissimilar in color and size, had body features that hinted they might be members of the same Antemninae sub-family.

Yet, adaptation to similar environments can cause unrelated organisms to develop similar features. This phenomenon, called convergent evolution, can complicate the process of sorting out connections on the praying mantis family tree.

Dr. Svenson is leading a research project to more accurately reclassify the massive praying mantis family tree using DNA testing and insights from the insects' body form and features -- their morphology. He has consolidated many of the country's major mantis collections at the Cleveland museum, thus building the Western Hemisphere's largest assemblage of the insects to aid this effort.

The final pieces of the puzzle that allowed the Cleveland researchers to identify the new mantis lineage arrived by chance. Neil Reid, Ph.D., a lecturer at Queen's University in Belfast, Northern Ireland, contacted Dr. Svenson, wondering if he wanted to examine a group of unknown praying mantises that Dr. Reid had gathered in a Honduran cloud forest.

The specimens Dr. Reid provided included two adult females and some male and female nymphs in various stages of development. The adult females looked the same as the female from the Paris museum. The male nymphs closely resembled the adult male from San Francisco. Having the nymphs let the researchers see the separate camouflage strategies the male and female mantises adopted as they matured.

Rodrigues conducted DNA tests that confirmed the mantises all represented the same genus and species, which had not been recognized before. The analysis also showed where this new mantis group, or taxon, fit on the complex mantis family tree: verifying that it belonged in the Antemninae subfamily.

"When people ask us, 'Why do you collect things?', it's because we still have a shockingly small concept of the biodiversity that's out there," Dr. Svenson says. "Museums are the places that hold that biological knowledge, and we're pulling information out of them all the time." 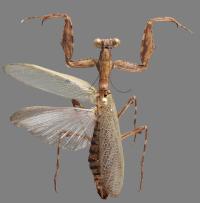