Sneaky parasitic weeds may be able to steal genes from the plants they are attacking and then use those genes against the host plant, according to a team of scientists.

In a study, researchers detected 52 incidences of the nonsexual transfer of DNA -- known as horizontal gene transfer, or HGT -- from a host plant that later became functional into members of a parasitic plant family known as the broomrapes, said Claude dePamphilis, professor of biology, Penn State. The transferred genes then became functional in the parasitic species. Although considered rare in more plants and other complex species, like plants, HGT may thus occur in some parasitic plants, an insight that could lead to better methods of controlling parasitic plants that threaten agriculture, he added.

"These parasitic plants that we study from the broomrape family include some of the the world's most devastating agricultural weeds," said dePamphilis. "The HGT discovery is really part of our effort to try to better understand how parasitic plants work and how we can better control them. Our hope is that we can use this information to find the best strategies to generate, or breed, resistant host plants."

The researchers, who released their findings today (Oct. 24) in the current issue of Proceedings of the National Academy of Sciences, suggest that the transfer could boost the parasitic plant's ability to invade their hosts and overcome defenses the host creates to try to ward off attacks. HGT may also help reduce the risk of infection for the parasites.

While horizontal gene transfers in less complex species, such as bacteria, is are common, most evolution in more complex organisms is driven by the sexual exchange of DNA, along with mutation and natural selection. However, the researchers suggest that the close feeding connections of parasitic plants with their hosts may increase the chances of intact genes traveling from the host to the parasite's genome where it can quickly become functional.

"Parasitic plants seem to have a far greater rate of horizontal gene transfer than non-parasitic plants and we think this is because of their very intimate connection they have with their host," said dePamphilis.

The roots of the parasite contact and enter the host, and then begin extracting water, sugars, mineral nutrients and even nucleic acids, including DNA and RNA, he added.

"So, they are stealing genes from their host plants, incorporating them into the genome and then turning those genes back around, very often, as a weapon against the host," said dePamphilis.

Farmers throughout the world struggle with these types of parasitic plants, which are so numerous in some areas of the world that they become a major source of crop loss. In Sub-Saharan Africa, for example, Striga -- or witchweed -- is one of the most damaging sources of agricultural loss, according to dePamphilis.

To detect HGT in the plants, the researchers used data generated by their collaborative research effort funded by the U.S. National Science Foundation -- the Parasitic Plant Genome Project -- to generate evolutionary histories for thousands of genes in the parasitic plants, said dePamphilis.

The researchers focused on transcriptomes -- expressed gene sequences -- of three parasitic plants:, Triphysaria versicolor, also called yellowbeak owl's-clover; Striga hermonthica, or giant witchweed; and Phelipanche aegyptiaca, called Egyptian broomrape, as well as the nonparasitic plant Lindenbergia philippensis, and genome sequences from 22 other nonparasitic plants. Because the researchers considered mRNA, which can move between hosts and their parasites, as a possible source of the transfers, they tested and re-tested the data to rule out the experimental host as the source of the genetic material. Instead, they found that the foreign sequences had been derived from entire genes of past host plants and incorporated into the parasitic plants genomes.

The U.S. National Science Foundation, the National Institute of Food and Agriculture Project of the U.S. Department of Agriculture, and the Huck Institutes of the Life Sciences supported this work.

Parasitic plants may form weapons out of genes stolen from hosts

Journal
Proceedings of the National Academy of Sciences
Funder
, US Department of Agriculture 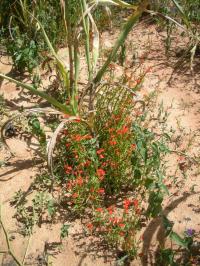