(Millbrook, NY) A return to firewood is bad for forests and the climate. So reports William Schlesinger, President Emeritus of the Cary Institute of Ecosystem Studies, in an Insights article published today in the journal Science.

In the race to meet clean energy standards, biomass energy is often touted as carbon neutral. To satisfy European Union (EU) demand, forests in the United States are turned into wood pellets and shipped overseas, to the tune of 7 million metric tons annually. When these pellets are burned in the EU, the electricity they generate helps fulfill Paris Agreement commitments.

The stage is also being set for a potential uptick in biomass energy in the US, as Congress may declare biomass carbon neutral in an effort to revive the American forest product industry. A tax on fossil carbon would further incentivize US demand for wood pellets.

But turning forests into fuel has hard limitations. Accounting for biomass energy often ignores the critical role forests play as a sink for carbon dioxide that might otherwise accumulate in the atmosphere. As Schlesinger reports, each year, an estimated 31% of the carbon dioxide emitted from human activities is stored in forests.

Native forests store more carbon dioxide than their plantation counterparts. Harvested pellets require fossil energy during manufacturing and overseas shipping. As Schlesinger explains, "The benefits of wood power must be discounted by the loss of the carbon sequestration that would have occurred in the original forests if they had not been harvested."

He notes, "It makes no sense to have Europeans embracing wood pellets as carbon neutral, while overlooking the carbon dioxide emitted during shipment and the losses of carbon storage from forests in the United States."

Then there is biodiversity to consider. In the southeastern US, pine plantations are a major source of pellet wood. Yet pines are of limited value in preserving the region's rich biodiversity. As demand for wood pellets rises, old growth forests are also put under pressure of harvest. A myriad of species rely on these globally rare ecosystems.

Schlesinger concludes, "Ultimately, the question is what kinds of forests are most desirable for the future. Recent research indicates that unless forests are guaranteed to regrow to carbon parity, production of wood pellets for fuel is likely to put more carbon dioxide into the atmosphere and preserve fewer species on the landscape during the next several decades." 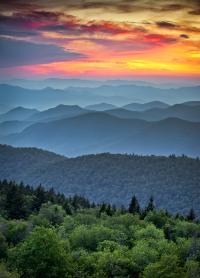 Forested Land in the Southern US