In a new study published in the journal Nature Ecology & Evolution, an international team led by Professor Baoyu Jiang of Nanjing University and including Dr Michael Pittman of the Department of Earth Sciences, the University of Hong Kong, shows that pterosaurs had at least four types of feathers in common with their close relatives the dinosaurs, pushing back the origin of feathers by some 70 million years.

Pterosaurs and dinosaurs are closely related reptiles that lived from about 230 to 66 million years ago. Reptiles are generally known for their scales, but pterosaurs evolved a furry covering -- often called 'pycnofibres' -- that was presumed to be fundamentally different from the feathers of birds and other dinosaurs, until now. The new study shows that pterosaurs had at least four types of feathers: (1) simple filaments ('hairs'), (2) bundles of filaments, (3) filaments with a tuft halfway down and (4) down feathers. These four feather types are known from two major dinosaur groups -- the plant-eating ornithischians and the theropods, which include living birds.

Dr Pittman who leads the HKU's Vertebrate Palaeontology Laboratory said: "These exceptional pterosaur specimens were imaged by myself and Tom Kaye of the Foundation for Scientific Advancement using Laser-Stimulated Fluorescence, a technique we co-developed. The LSF images vividly revealed the form of the wing membrane, demonstrating that its generally ginger-coloured feathers were preserved in place."

Professor Mike Benton from the University of Bristol's School of Earth Sciences added: "We ran some evolutionary analyses and they showed clearly that the pterosaur pycnofibres are feathers, just like those seen in modern birds and across various dinosaur groups."

Despite careful searching, the team was unable to find any anatomical evidence that the four pycnofibre types identified were in any way different from the feathers of dinosaurs, including those of birds. Thus, they came to the conclusion that they must share an evolutionary origin with dinosaurs around 250 million years ago. 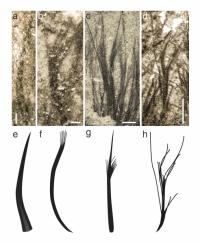