"Hello, World!" came the message from the International Space Station as NASA successfully beamed high-definition video via laser from space to ground on Thursday, June 5. The 175-megabit video transmission was the first of its kind for the Optical Payload for Lasercomm Science (OPALS) with the goal of improving the way we receive data from orbit and beyond. In fact, this emerging technology of optical communications--or lasercomm--is likened to an upgrade from dial-up to DSL.

"It's incredible to see this magnificent beam of light arriving from our tiny payload on the space station," said Matt Abrahamson, OPALS mission manager at NASA's Jet Propulsion Laboratory (JPL) in Pasadena, California.

OPALS launched to the space station aboard the SpaceX Dragon earlier this spring. This technology demonstration furthers NASA's exploration of higher-bandwidth methods of communicating with future spacecraft. Optical communications tools like OPALS use focused laser energy to achieve data rates 10 to 1,000 times higher than current space communications, which rely on radio portions of the electromagnetic spectrum.

OPALS' success also is an important step in improving communication rates with spacecraft beyond low-Earth orbit. The instrument allows for communications rates to keep pace with the ever-increasing data generation produced by scientific instruments. The capability could replace the Federally-regulated radio frequencies currently in use from orbit to meet the needs anticipated by researchers for future missions, like Mars.

"We look forward to experimenting with OPALS over the coming months in hopes that our findings will lead to optical communications capabilities for future deep space exploration missions," Abrahamson said.

The space station moves through Earth's sky at approximately 17,500 mph. This speed requires extreme precise pointing ability. It's equivalent to a person aiming a laser pointer at the end of a human hair 30 feet away and keeping it there while walking. To achieve this precision, OPALS locked onto a ground beacon emitted by the Optical Communications Telescope Laboratory ground station at the Table Mountain Observatory in Wrightwood, California.

Once locked onto the signal, OPALS began to modulate the beam from its 2.5-Watt 1,550-nanometer laser to transmit the video. The entire transmission lasted 148 seconds and achieved a maximum data rate of 50 megabits per second. It took OPALS 3.5 seconds to transmit a single copy of the "Hello World!" video message, which would have taken more than 10 minutes using traditional downlink methods. The message was sent multiple times during the transmission.

The OPALS instrument was built at JPL as part of the Phaeton hands-on training program and is slated to run for a prime mission of 90 days. The OPALS Project Office is based at JPL, a division of the California Institute of Technology in Pasadena. During these transmissions, NASA also will train personnel in optical communication systems operations, leading to improved optical communication instrument design.

Commercial ventures can likewise take note of the project, as it proves the use of lasercomm for optimized communications from space. This may mean higher definition video feeds from near-Earth assets, such as satellites, as well as those in deep space, like future Mars rovers. This improves the interaction and experience with the stakeholders, whether they be researchers, engineers or consumers. And if you remember the days of having to leave the room to download a video when using DSL, you know that higher-speed downloads are definitely the way to go! 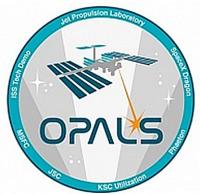