A major quake of magnitude seven on the Richter scale in the politically-fragile region of the Middle East could have dire consequences for precious holy sites and even world peace, says Tel Aviv University geologist Dr. Shmulik Marco. In light of this imminent danger, Marco, from the school’s Department of Geophysics and Planetary Sciences, has taken an historical approach to earthquake forecasting by using ancient records from the Vatican and other religious sources in his assessment. The past holds the key to the future, he says.

“All of us in the region should be worried,” explains Marco, who dedicates his career to piecing together ancient clues.

Based on the translations of hundreds of documents – some of the originals of which he assumes reside in Vatican vaults – Marco has helped determine that a series of devastating earthquakes have hit the Holy Land over the last two thousand years. The major ones were recorded along the Jordan Valley in the years 31 B.C.E., 363 C.E., 749 C.E., and 1033 C.E. “So roughly,” warns Marco, “we are talking about an interval of every 400 years. If we follow the patterns of nature, a major quake should be expected any time because almost a whole millennium has passed since the last strong earthquake of 1033.”

Written by monks and clergy, the documents, which span about two millenia, can help determine the location and impact of future quakes on several fault planes cutting through Israel and its neighboring countries, Marco believes. “We use the records, written in churches and monasteries or by hermits in the desert, to find patterns,” he says. Marco credits the help of an international team of historians, who have deciphered the Latin, Greek, and Arabic of the original correspondence.

He continues, “Even if these papers were not ‘officially’ recording history, they hold a lot of information. ... Some are letters to Europe asking for funding of church repairs. And while many of these accounts are told in an archaic religious manner, they help us confirm the dates and location of major calamities. Following these patterns in the past can be a good predictor of the future.”

One of the most cited Christian chroniclers in history upon whom Marco bases some of his conclusions is a ninth-century Byzantine aristocratic monk named Theophanes, venerated today by Catholics. In one manuscript, Theophanes wrote, “A great earthquake in Palestine, by the Jordan and in all of Syria on 18 January in the 4th hour. Numberless multitudes perished, churches and monasteries collapsed especially in the desert of the Holy City.”

While Christian sources helped Marco confirm ancient catastrophes and cast light on future ones, Jewish sources from the Bible also gave him small pieces of the puzzle. A verse in Zachariah (Ch. 14) describes two instances of earthquakes, one of which split apart the Mount of Olives, he says. Muslim clergy have also collected ancient correspondence, which further broadens the picture.

”Earthquakes are a manifestation of deeper processes inside the earth,” Marco says. “My questions and analysis examine how often they occur and whether there is pattern to them, temporally or spatially. I am looking for patterns and I can say that based on ancient records, the pattern in Israel around the Dead Sea region is the most disturbing to us.

“When it strikes – and it will – this quake will affect Amman, Jordan as well as Ramallah, Bethlehem, and Jerusalem. Earthquakes don’t care about religion or political boundaries,” Marco concludes.

American Friends of Tel Aviv University supports Israel’s leading center of higher learning, the largest Jewish university anywhere. It is ranked among the world’s top 100 universities in science, biomedical studies, and social science, and rated one of the world’s top 200 universities overall. Internationally recognized for the scope and groundbreaking nature of its research programs, Tel Aviv University consistently produces work with profound implications for the future. 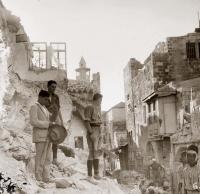