The discovery of a gene involved in determining the melting point of cocoa butter -- a critical attribute of the substance widely used in foods and pharmaceuticals -- will likely lead to new and improved products, according to researchers in Penn State's College of Agricultural Sciences.

The finding by plant geneticists also should lead to new varieties of the cocoa plant that could extend the climate and soil-nutrient range for growing the crop and increase the value of its yield, they said, providing a boost to farmers' incomes in the cocoa-growing regions of the world.

Cacao, Theobroma cacao L., is an understory tropical tree domesticated in the Amazon basin and today widely cultivated in West Africa, Central and South America and Southeast Asia. Around the world, more than five million cocoa farmers -- and more than 40 million people total -- depend on cocoa for their livelihood, according to the World Cocoa Foundation, which puts annual cocoa production worldwide at 3.8 million tons, valued at $11.8 billion.

Cacao pods, each containing around 40 seeds, are harvested approximately 20 weeks after pollination. The seeds contain about 50 percent total lipids (cocoa butter), which provides a main raw ingredient for chocolate manufacturing as well as ingredients for pharmaceutical and cosmetic products.

Cocoa butter with altered melting points may find new uses in specialty chocolates, cosmetics and pharmaceuticals, said lead researcher Mark Guiltinan, professor of plant molecular biology, who has been conducting research on the cacao tree for three decades. For example, a chocolate with a higher or lower melting point would be useful for production of chocolate with specific textures and specialty applications.

"The 'snap' and 'melt' of chocolate are two very important textural features that determine the appeal of chocolate to consumers, and having new varieties of the cocoa plant that produce butter with different melting points would be a valuable resource to control those characteristics," Guiltinan explained. "Medical applications could include production of drug-delivery products with slower release of drugs than is possible with current cocoa-butter-based systems."

Collaborating on the research were Siela Maximova, senior scientist and associate professor of horticulture, and Yufan Zhang, who received a doctoral degree in plant biology in January of 2015.

In a previous study, a stearoyl-acyl carrier protein desaturase (SAD) gene family was first described in the chocolate tree, by Guiltinan's laboratory and collaborators from the International Cocoa Genome Consortium, which sequenced the entire genome of the plant.

In this follow-up research, described this month online in Frontiers in Plant Science (Plant Genetics and Genomics Section), the SAD gene family is examined in detail, and the expression patterns of each SAD gene in various cacao tissues is explored along with functional analysis to study how the enzyme works.

Researchers discovered that a single gene -- TcSAD1 -- is primarily involved in the synthesis of cocoa butter and is responsible for its melting point.

"We used state-of-the-art plant science techniques to gain evidence for the role of the SAD1 gene in cocoa butter biosynthesis," Guiltinan said. "The other SAD genes appear to play other roles in the growth of the chocolate tree, such as flower and leaf development, where these fatty acids play important roles as key components of various membrane systems. This information can be used to develop biomarkers for screening and breeding of new cacao varieties with novel fatty acid compositions of cocoa butter."

Notably, cocoa butter consists of almost equal amounts of palmitic acid, stearic acid and oleic acid. Its exact composition determines its melting temperature, which is very close to human body temperature, thus providing the smoothness and feel of chocolate in the mouth, as well as the creamy texture of cosmetics on skin.

"During cacao seed development, large amounts of fatty acids are synthesized that are rich in saturated and monounsaturated lipids," Guiltinan said. "An important part of this process is the activity of an enzyme produced by the SAD1 gene that creates a special double bond critical in determining the melting point of chocolate, that is very close to the human body temperature and makes cocoa butter quite unique."

The research was supported by Penn State, the University's College of Agricultural Sciences, The Huck Institutes of Life Sciences and the American Research Institute Penn State Endowed Program in the Molecular Biology of Cacao. 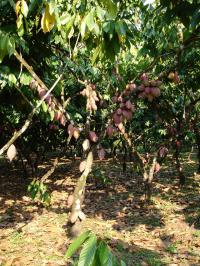