The basketball is in your hands. The score is tied and there are only a few seconds left on the clock. You have the ball about 10 feet away from the basket on the right side of the court, just outside the free-throw lane. It's decision time: Is it best to try a direct shot to win the game on a swish? Or do you use the backboard and bank home the winning basket?

Time's up; the buzzer sounds. Were you a hero or a goat?

New research by engineers at North Carolina State University show that you had a better chance of scoring that particular game-winning bucket with a bank shot than with a direct shot.

After simulating one million shots with a computer, the NC State researchers show that the bank shot can be 20 percent more effective when shooting at many angles up to a distance of about 12 feet from the basket. Bank shots are also more effective from the "wing" areas between the three-point line and the free-throw lane. However, straight-on shots – those corresponding to the area around the free-throw line – from further than 12 feet are not as well suited for bank shots.

The researchers also discovered that if you imagine a vertical line 3.327 inches behind the backboard and found where it crossed the aim point on the "V" shape on the backboard, you'd find the optimal spot to bank the basketball to score a basket.

"Basketball players can't take a slide rule out on the court, but our study suggests that a few intuitive assumptions about bank shots are true," says Dr. Larry Silverberg, professor of mechanical and aerospace engineering at NC State and the lead author of a paper describing the research. "They can be more effective than direct shots, especially from certain areas of the court – and we show which areas on the court and where the ball needs to hit the backboard."

The researchers made a few assumptions while conducting the study. They used a men's basketball, which is slightly bigger and heavier than a women's basketball; launched the simulated shots from 6, 7, and 8 feet above the ground; and imparted 3 hertz of backspin – which means three revolutions per second – on the shots. The latter variable was shown in previous research to be optimal for successfully converting a free throw.

The research was published in the Journal of Quantitative Analysis in Sports. Lecturer Dr. Chau M. Tran and undergraduate student Taylor M. Adams co-authored the paper with Silverberg.

The Department of Mechanical and Aerospace Engineering is part of NC State's College of Engineering.

Abstract: The purpose of this study was to gain an understanding of the bank shot and ultimately determine the optimal target points on the backboard for the bank shot in men's basketball. The study used over one million three-dimensional simulations of basketball trajectories. Four launch variables were studied: launch height, launch speed, launch angle, and aim angle. The shooter's statistical characteristics were prescribed to yield a 70 percent free throw when launching the ball seven feet above the ground with 3 Hz of back spin. We found that the shooter can select a bank shot over a direct shot with as much as a 20 percent advantage. The distribution over the court of preferences of the bank shot over the direct shot was determined. It was also shown that there is an aim line on the backboard independent of the shooter's location on the court. We also found that at 3.326 inches behind the backboard, there exists a vertical axis that aids in finding the optimal target point on the backboard. The optimal target point is the crossing of the vertical axis and the aim line that is in the shooter's line of sight.

Journal of Quantitative Analysis in Sports

The physics of bank shots 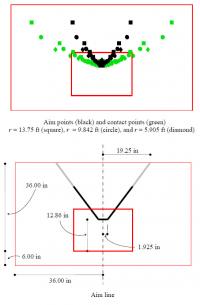 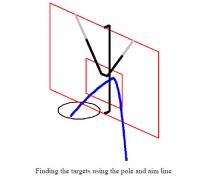 How to Aim the Bank Shot