Female mice prefer songs of mice that are different from their parents when selecting a mate, according to a study published February 5, 2014 in PLOS ONE by Akari Asaba from the Azabu University, Japan, and colleagues. Furthermore, these preferences may be shaped by early social experiences with their fathers.

Many animals can learn the characteristics of a desirable mate when they are young, and this includes the ability to recognize and avoid mating with close relatives. Male mice emit ultrasonic vocalizations, or songs, when they encounter females, and the scientists in this study investigated whether female mice can learn, remember, and prefer specific male song characteristics. Female mice were raised with their biological father, a different father, or no father. Researchers then recorded songs from 4 male mice, one of which was a close relative. The female mouse was placed in a cage with compartments containing the male songs, as well as their sexual scents, and scientists recorded the time each female searched before making a selection.

The authors found that female mice displayed an innate preference for male songs from different families, and this preference was influenced by the female's reproductive cycle and scent-based sexual cues from the male. Female mice raised by non-biological also preferred songs from other families, and no preference occurred when there was no father; these results indicate a possible learned behavior through exposure to the father's song. This is one of the first studies in mammals to demonstrate that male songs may contribute to kin recognition and mate choice by females in order to avoid inbreeding.

This work was funded by grants-in-aid for scientific research from the Ministry of Education, Science, Sports and Culture of Japan (T.K. 14760187 & 16086204) and partially supported by a research project grant awarded by the Azabu University (T.K. & K.M.). The funders had no role in study design, data collection and analysis, decision to publish, or preparation of the manuscript.

The co-author Dr. Masahiro Kato is affiliated with Kato Acoustics Consulting Office. This does not alter the authors' adherence to all the PLOS ONE policies on sharing data and materials.

PLEASE LINK TO THE SCIENTIFIC ARTICLE IN ONLINE VERSIONS OF YOUR REPORT (URL goes live after the embargo ends): http://dx.plos.org/10.1371/journal.pone.0087186 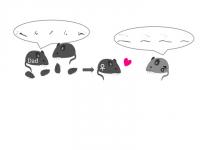