In making tough, life-changing decisions, people often weigh the risks associated with the options before them and choose accordingly. Now researchers reporting in the Cell Press journal Current Biology on June 30 have found that pea plants also make choices about how to grow based on an assessment of risk.

"To our knowledge, this is the first demonstration of an adaptive response to risk in an organism without a nervous system," says Alex Kacelnik of Oxford University in the UK. "We do not conclude that plants are intelligent in the sense used for humans or other animals, but rather that complex and interesting behaviours can be theoretically predicted as biological adaptations, and executed by organisms, on the basis of processes evolved to exploit natural opportunities efficiently."

In the study, Kacelnik and his colleagues at Tel-Hai College in Israel grew pea plants with their roots split between two pots. The plants were faced with a decision about how much effort they should allocate to growing roots in each one.

In the first experiment, the researchers found that plants grew more roots in the pot with more nutrients, much as animals spend more time foraging in richer food patches. They then split the roots of each plant between two pots that offered the same nutrient levels on average. However, one pot offered a constant level of nutrients. In the other, nutrient levels varied over time. The question was whether plants would choose to grow more roots in one pot or the other.

Based on theoretical analyses of how decision makers such as humans or animals should respond to such choices, Kacelnik and his colleagues predicted that plants might prefer the more variable pot, accepting more risk, when the average nutrient level was low. In that setting, the more variable environment is still a gamble, but one that could pay off. When the average nutrient level was high, they predicted the plants would choose just the opposite. There would be no reason to accept the risk associated with the more unpredictable environment.

The researchers say they don't yet know how the plants' sense variance, or even if their physiology is specifically adapted to respond to risk. Nevertheless, the findings show pea plants as surprisingly "dynamic strategists" with the ability to make decisions much as an intelligent being would.

"I used to look at plants as passive receivers of circumstances," says Efrat Dener, who is now a master's student at Ben-Gurion University in Israel. "This line of experiments illustrates how wrong that view is: living organisms are designed by natural selection to exploit their opportunities, and this often implies a great deal of flexibility."

"To see that decision-making models developed by economists for human decision makers and by zoologists to understand animal behavior can predict the behavior of plants facing similar choices is fascinating," adds Hagai Shemesh of Israel's Tel-Hai College. He says that they are now eager to present plants with additional tasks requiring adaptive responses, to explore the extent to which "optimality considerations proposed for brained agents anticipate the solutions evolved by plants."

This study was funded by a Tel-Hai College internal research support grant. 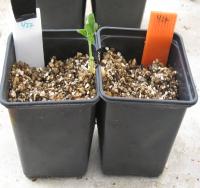