As abundant and widespread bees, it is common to see both bumble bees and honey bees foraging on the same flower species during the summer, whether in Britain or many other countries.

Yet researchers at the Laboratory of Apiculture and Social Insects (LASI) at the University of Sussex, show that these two different bees dominate on different flower species and have found out why.

By studying 22 flower species in southern England and analysing the behaviour of more than 1000 bees, they found that ‘energy efficiency’ is a key factor when it comes to mediating competition.

Professor of Apiculture, Francis Ratnieks, said: “While they forage on the same flowers, frequently we find that bumble bees will outnumber honey bees on a particular flower species, while the reverse will be true on other species growing nearby.

“What was remarkable was that differences in foraging energy efficiency explained almost fully why bumble bees predominated on some flower species and honey bees on others.

“In essence, bumble bees have an advantage over honey bees in being faster at visiting flowers, so can gather more nectar (energy), but a disadvantage in being larger, and so using more of the nectar energy to power their foraging. On some flower species this gave an overall advantage to bumble bees, but on others to honey bees.”

In the study, published in the journal Ecology, the researchers used stopwatches to determine how many flowers a bee visited in one minute. Using a portable electronic balance to weigh each bee, researchers found that, on average, bumble bees are almost twice as heavy as the honey bees. This means that they use almost twice as much energy as honey bees. The stopwatch results showed that they visit flowers at twice the rate of honey bees, which compensate in terms of energy efficiency.

On some flower species such as lavender, bumble bees dominated and were visiting flowers at almost three times the rate of honeybees.

The differences in the morphology of flowers likely affects how energy efficient the two bee types were. Ling heather, with its mass of small flowers, was better suited to the nimbler honey bee who were able to visit more flowers per minute than the bumble bees. By contrast, Erica heather, which was growing beside the ling heather in the same nature reserve, has large bell shaped flowers and was better suited to bumble bees.

Author Dr Nick Balfour said: “The energy efficiency of foraging is particularly important to bees. The research showed that the bees were walking (and flying) a challenging energy tightrope; half the energy they obtained from the nectar was expended in its collection.”

Energy (provided by nectar for bees) is a fundamental need, but the fact that honey bees and bumble bees do not compete head on for nectar is reassuring in terms of conservation and co-existence.

“Bee conservation therefore benefits from flower diversity, so that should certainly be a focus on bee conservation efforts. But fortunately, flowering plants are diverse.”

Dr Balfour said: “Whether you have a window box, allotment or a garden, planting a variety of summer-blooming flowers or cutting your grass less often can really help pollinators during late summer.”

Research reveals why plant diversity is so important for bee diversity 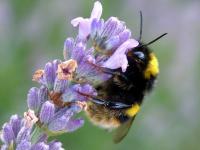