Scientists examining a taxonomically confused group of marine mammals have officially named a species new to science: the Australian humpback dolphin, Sousa sahulensis, according to the Wildlife Conservation Society and Clymene Enterprises.

The study describing the newly named species is the culmination of a 17-year long systematic examination of all available historical records, physical descriptions, and genetic data of humpback dolphins—a widespread group of coastal cetaceans ranging from the coast of West Africa to the northern coast of Australia. The Australian humpback dolphin becomes the fourth recognized humpback dolphin species.

The study appears online today in the journal Marine Mammal Science, and will appear in the journal's October edition. The authors are: Thomas A. Jefferson of Clymene Enterprises and Howard C. Rosenbaum of the Wildlife Conservation Society.

"We've finally managed to settle many long-standing questions about humpback dolphins—particularly how many species actually exist—using a huge body of data collected over two centuries and analyzed with the latest scientific tools," said Dr. Jefferson.

"The formal recognition and naming of a new species brings with it a need to formulate or update plans for protection of these dolphins," said Dr. Rosenbaum, Director of WCS's Ocean Giants Program. "Humpback dolphins throughout their range are threatened with fisheries interactions, vessel impacts, and development in their coastal habitats. Efforts to protect humpback dolphins and other coastal dolphins, and their most important habitats are essential for the survival of these species."

The process of describing a species new to science requires a systematic analysis of all species most closely related to the animal in question. The humpback dolphins in particular have vexed researchers and taxonomists for decades until researchers from the Wildlife Conservation Society and a number of other institutions provided the most definitive results in late 2013.

Noteworthy naturalists such as Richard Owen (who coined the word "dinosaur"), Georges Cuvier, and Richard Lydekker have added to the literature on humpback dolphins over the centuries. In recent years, scientists have disagreed with one another about the number of species, with some considering all humpback dolphins the same species and others postulating as many as nine different ones.

The new study contains detailed reviews and descriptions of the currently recognized four humpback dolphin species, using external and skeletal measurements, coloration, molecular genetics, and geographic distribution. The study is the next step building upon recent studies that first detected the existence of a unique humpback dolphin species inhabiting the waters of northern Australia and the island of New Guinea, using genetics and morphological characters.

Aside from slight differences in overall length, number of teeth and vertebrae, and geographic distribution, the Australian humpback dolphin differs in appearance from the other three humpback species. Its dorsal fin is lower and more wide-based than the dorsal fins of Sousa teuszii and S. plumbea, and its coloration is dark gray, as opposed to the distinctly white (often with a pink tinge) coloration of its closest humpback neighbor, Sousa chinensis. The Australian humpback dolphin also possesses a distinctive dark dorsal "cape."

Another interesting finding with the designation of the Australian humpback dolphin is the support its distribution provides to a zoogeographical barrier described by Alfred Russell Wallace, one of the first naturalists to examine in detail the life of the Malay Archipelago. He identified a barrier now known as the Wallace Line. To the west of the line, terrestrial animal species are mostly of Asian origin; to the east, animal species largely descend from Australasian ancestors. Researchers have also found the Wallace Line to be a barrier for marine species as well, and the divide between Indo-Pacific and the Australian humpback dolphins seems to coincide with this border.

There is currently no population estimate for the Australian humpback dolphin, but the authors warn that it is unlikely that more than a few thousand dolphins of that species exist, based on available sighting data. Potential threats to all humpback dolphins include coastal development, accidental capture by fishermen, vessel collisions, and in a few cases direct hunting. 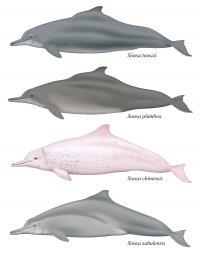