Superconductivity is one of the most mysterious phenomena in nature in that the materials can conduct electrical current without any resistance. The cuprates hold the record high superconducting temperature at ambient pressure so far, but understanding their superconducting mechanism remains one of big challenges of physical sciences listed as one of 125 big quests announced by Science.

These two features are in sharp contrast to the favorable criteria for all previously known cuprate superconductors.

The compressed local octahedron results into a reversed orbital order with 3z2 lifted above 3dx2-y2 leading to strong multiband scenario, while the overdoped state violates the previous mot holding for superconducting phase.

Impressively, the new material demonstrates superconducting transition temperature with Tc above 73K, 30 K higher than that for the isostructural classical "conventional" superconductor based on La2CuO4.

This study entitled "Superconductivity in a unique type of copper oxide" was published on PNAS.

The study was supported by the National Science Foundation as well as the Ministry of Science and Technology of China. 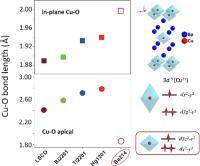