Sugars are usually known as energy storage units in plants and the insects that feed on them. But, sugars may also be part of a deadly game of tag between plant and insect according to scientists at the Max Planck Institute for Chemical Ecology. Grasses and crops such as maize attach sugars to chemical defenses called benzoxazinoids to protect themselves from being poisoned by their own protective agents. Then, when an insect starts feeding, a plant enzyme removes the sugar to deploy the active toxin. The Max Planck scientists have now discovered why this defensive strategy fails to work against Spodoptera larvae. When the researchers examined the frass of these pests − pests that cause enormous crop damage −, they found the toxin with sugar still attached. After the plant removes the sugar, the insect reattaches it but in the opposite stereochemical configuration. In contrast to the original plant compound, the new substance can no longer be cleaved by the plant enzyme to generate the toxin. Attaching the sugar in the opposite configuration turns out to be a very simple but effective detoxification strategy which explains the success of Spodoptera species. (Angewandte Chemie - International Edition, September 2014, doi: 10.1002/ange.201406643).

Plants usually defend themselves against insect feeding by producing toxins or deterrents. However, many insects have become adapted to plant defenses and can feed on plant tissues containing toxins or deterrents without the expected negative effects. Insects overcome plant defenses by the rapid excretion, sequestration or detoxification of toxic substances. Not only have such adaptations contributed to the vast diversification of insects in the course of evolution, they also support the success of agricultural pests specialized on certain crop plants that jeopardize crop yields every year.

With the abundance of maize grown throughout the world, it is not surprising that the crop has many insect pests, including larvae of the genus Spodoptera. In North and South America, the fall armyworm Spodoptera frugiperda is an important maize pest causing considerable damage. Like all cereals and other members of the grass family, maize plants defend themselves with chemistry. Leaves of young maize plants contain large amounts of a benzoxazinoid called (2R)-DIMBOA-glucoside. The plant also produces an enzyme active in caterpillar guts which cleaves DIMBOA-glucoside to release the sugar. The free DIMBOA formed as a result causes many insects to die or cease growing, but not the fall armyworm.

A group of researchers led by Daniel Giddings Vassão and Jonathan Gershenzon from the Department of Biochemistry at the Max Planck Institute for Chemical Ecology in Jena, Germany, have recently discovered a previously unknown detoxification strategy in these pest insects. Caterpillars of the fall armyworm and two other Spodoptera species deploy a gut enzyme that catalyzes the attachment of a sugar to the toxic free DIMBOA. The sugar group is reattached in a mirror-image orientation (forming a (2S)-DIMBOA-glucoside) so that the plant enzyme cannot remove it a second time. The scientists found out about this clever mechanism when they analyzed larval frass. Modern and highly sensitive mass spectrometry and nuclear magnetic resonance spectroscopy methods showed that the benzoxazinoid identified in the larval frass was no longer identical to the substance in the plant leaves.

"We were surprised that the difference between the insect metabolite and the original plant compound was simply the stereochemical configuration of one atom. The crucial change, however, is the fact that the insect metabolite is no longer reactive to the plant enzyme and the toxic DIMBOA cannot be formed any more. The elegance of such a mechanism comes from its simplicity, yet it saves the insects from being poisoned," said Felipe Wouters, who performed the experiments for his doctoral thesis at the institute, summarizing the results. Like his colleague Daniel Giddings Vassão, Felipe Wouters is from Brazil, where fall armyworm caused major losses of the maize yield before Bt maize was introduced. According to a Reuters report this summer Brazilian farmers are complaining that Bt is not protecting the plants against the fall armyworm any longer. The increasing resistance of pest insects to Bt is another reason to look deeper into the natural insect adaptations against plant defenses. "If we can better understand how much this gut enzyme has helped the fall armyworm to become such a dangerous pest on maize, we may be able to use this to our advantage by impairing this insect enzyme and restoring the full defensive potential of maize against these pests," says Daniel Giddings Vassão.

Plant-insect interactions involve very complex and dynamic metabolic processes. The importance of the three-dimensional structure of molecules and the stereospecificity of chemical reactions is often overlooked. "The chemical chirality of the compounds is the key here," explains Jonathan Gershenzon, director of the Department of Biochemistry. "These insects can teach us humans a lot about an important chemical concept, the idea that a compound and its mirror image are different even though the atoms are connected in the same way." The term "chirality" is derived from the Greek word for hand and corresponds to an anatomical principle, namely the mirror-image arrangement of our left and right hands. That two mirror molecules can have a completely different mode of action became widely known in the aftermath of the tragic effects the sedative drug Contergan had on unborn children in the early 1960s. As a drug, the chemical agent thalidomide was available in two versions, as an (S)- as well as an (R)-thalidomide. When scientists tried to clarify the fatal effects the drug had when taken by pregnant women, they found that only (S)-thalidomide caused birth defects, whereas (R)-thalidomide had the desired calming and anti-nausea effects.

The Max Planck scientists now want to identify the enzymes and the encoding genes that are responsible for the detoxification process in the fall armyworm. They also want to look for equivalent enzymes in related species and compare these. DIMBOA is only one member of the vast variety of toxic benzoxazinoids found in grasses. If the researchers can obtain a more comprehensive picture of how benzoxazinoids are metabolized in pest insects, they may be able to design better strategies to reduce pest damage. [AO]

Playing tag with sugars in the cornfield 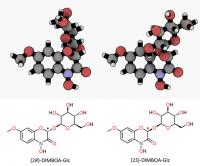