Boulder, Colo., USA: Beneath the cold, dark depths of the Arctic ocean sit vast reserves of methane. These stores rest in a delicate balance, stable as a solid called methane hydrates, at very specific pressures and temperatures. If that balance gets tipped, the methane can get released into the water above and eventually make its way to the atmosphere. In its gaseous form, methane is one of the most potent greenhouse gases, warming the Earth about 30 times more efficiently than carbon dioxide. Understanding possible sources of atmospheric methane is critical for accurately predicting future climate change.

In the Arctic Ocean today, ice sheets exert pressure on the ground below them. That pressure diffuses all the way to the seafloor, controlling the precarious stability in seafloor sediments. But what happens when the ice sheets melt?

New research, published on today in Geology, indicates that during the last two global periods of sea-ice melt, the decrease in pressure triggered methane release from buried reserves. Their results demonstrate that as Arctic ice, such as the Greenland ice sheet, melts, similar methane release is likely and should be included in climate models.

Pierre-Antoine Dessandier, a postdoctoral scientist at the Arctic University of Norway, and his co-authors were interested in two periods around 20 thousand years ago (ka), known as the Last Glacial Maximum (LGM), and 130 ka, known as the Eemian deglaciation. Because the Eemian had less ice and was warmer than the LGM, it is more similar to what the Arctic is experiencing today, serving as a good analogue for future climate change.

"The oldest episode recorded (Eemian) is very important because it was a strong interglacial in the Arctic, with very similar climate characteristics to what is happening today," Dessandier said. "The idea with the Eemian interglacial is to... compare that with what could happen in the future. Seafloor methane emission is important to consider for modeling spatial estimations of future climate."

To track past methane release, Dessandier measured isotopes of carbon (carbon molecules with slightly different compositions) in the shells of tiny ocean-dwellers called foraminifera. Because the foraminifera build their shells using ingredients from the water around them, the carbon signal in the shells reflects the chemistry of the ocean while they were alive. After they die, those shells are preserved in seafloor sediments, slowly building a record spanning tens of thousands of years.

To reach that record, Dessandier and the team needed to drill a deep core off the western coast of Svalbard, a Norwegian archipelago in the Arctic Ocean. The team collected two cores: a 60-meter reference core, which they used to date and correlate stratigraphy, and a 22-meter core spanning the LGM and the Eemian deglaciations. The site for the 22-meter core was chosen based on its "pockmark" feature, marking where the gas escaped violently in the past, and massive carbonate rocks that form where methane is still leaking out today.

Carbon isotopes of microscopic shells in the long core revealed multiple episodes of methane release, which geochemists recognize from their distinct spikes in the record. Because methane is still seeping from the sediments, Dessandier needed to to make sure the signal wasn't from modern interference. He compared the shells' carbon isotope values to measurements his colleagues made on carbonate minerals that formed outside the shells, after the foraminifera had died, when methane emission was at its most intense.

The isotopic record showed that as ice melted and pressure on the seafloor lessened, methane was released in violent spurts, slow seeps, or--most likely--a combination of both. By the time the ice disappeared completely, some thousands of years later, methane emissions had stabilized.

How much methane eventually made it to the atmosphere, which is what would contribute to the greenhouse effect, remains uncertain. Part of the problem in quantifying this is the microbial communities that live on the seafloor and in the water, and that use methane to survive.

"For the microbes, it's an oasis. It's fantastic," Dessandier said. "So they grow like crazy, and some species produce methane and others consume it." That activity complicates the core's detailed carbon record. In sediments, a bustling community with lots of methane recycling could overprint the original signal; in the water column, where nutrients may be less plentiful, methane could get gobbled up or transformed into carbon dioxide before it reaches the atmosphere.

Despite modern complications, the team has pinpointed two methane releases associated with ice retreat, like they hypothesize could happen today. The best part for Dessandier was discovering layers of massive bivalves in the cores which, based on modern observations from remotely operated vehicles, can indicate a methane leak. "It was super interesting for us to observe these same sorts of layers at the LGM and the Eemian," he said. "It confirmed what we thought at the beginning, with a methane-rich seafloor allowing this community to develop... We can say that these events are very similar, with similar processes happening during both periods of warming. So this is something to consider for our current warming. It could happen again." 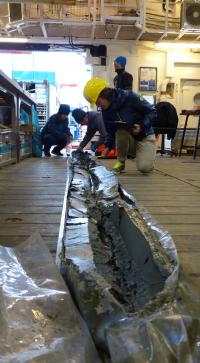