For centuries drought has come and gone across northern sub-Saharan Africa. In recent years, water shortages have been most severe in the Sahel--a band of semi-arid land situated just south of the Sahara Desert and stretching coast-to-coast across the continent, from Senegal and Mauritania in the west to Sudan and Eritrea in the east. Drought struck the Sahel most recently in 2012, triggering food shortages for millions of people due to crop failure and soaring food prices.

Various factors influence these African droughts, both natural and human-caused. A periodic temperature shift in the Atlantic Ocean, known as the Atlantic Multi-decadal Oscillation, plays a role, as does overgrazing, which reduces vegetative cover, and therefore the ability of the soil to retain moisture. By replacing vegetative cover's moist soil, which contributes water vapor to the atmosphere to help generate rainfall, with bare, shiny desert soil that merely reflects sunlight directly back into space, the capacity for rainfall is diminished.

Another human-caused culprit is biomass burning, as herders burn land to stimulate grass growth, and farmers burn the landscape to convert terrain into farming land and to get rid of unwanted biomass after the harvest season. As with overgrazing, fires dry out the soil and stymie the convection that brings rainfall. Small particles called aerosols that are released into the air by smoke may also reduce the likelihood of rainfall. This can happen because water vapor in the atmosphere condenses on certain types and sizes of aerosols called cloud condensation nuclei to form clouds; when enough water vapor accumulates, rain droplets are formed. But have too many aerosols and the water vapor is spread out more diffusely to the point where rain droplets don't materialize.

The relationship between fire and the water in northern sub-Saharan Africa, however, had never been comprehensively investigated until recently. A study published in the journal Environmental Research Letters, led by Charles Ichoku, a senior scientist at NASA's Goddard Space Flight Center in Greenbelt, Maryland, seeks to shed light on the connection.

"We wanted to look at the general impacts of burning on the whole spectrum of the water cycle," said Ichoku.

To do so, Ichoku and his colleagues used satellite records from 2001 to 2014--including data from NASA's Moderate Resolution Imaging Spectroradiometer and the Tropical Rainfall Measurement Mission--to analyze the impact of fires on various water cycle indicators, namely soil moisture, precipitation, evapotranspiration and vegetation greenness. Other work performed by the group focused more closely on examining the interactions between clouds and smoke and also the effects of fires on surface brightness.

When Ichoku used satellite data to match fire activity to hydrological indicators, a pattern emerged. "There is a tendency for the net influence of fire to suppress precipitation in northern sub-Saharan Africa," he said.

For example, in years that had more than average burning during the dry season, measurements of soil moisture, evaporation and vegetation greenness--all of which help to trigger rain--decreased in the following wet season. Even within dry seasons, the amount of water decreased in areas with more humid climates as the burning became more severe.

The results so far show only a correlation between fires and water cycle indicators, but the data gathered from the study is allowing scientists to improve climate models to be able to establish a more direct relationship between biomass burning and its impacts on drought.

For example, the research team is now incorporating the rate of radiant heat output from fires as well as the rate of fire-induced land-cover conversion into regional models, including the NASA Unified Weather Research and Forecasting model. Such new capability will enable the simulation of real fire impacts on drought.

Future modeling may explain some of the study's seemingly paradoxical findings, including the fact that, even as fires decreased by 2 to 7 percent each year from 2006 to 2013, precipitation during those years did not increase proportionately.

Ichoku thinks one possible reason a decrease in fires didn't result in more precipitation has to do with the change in the types of lands that are being burned. The study found that throughout the same period, more forests and wetlands were being converted to cropland than in previous years. He notes that recent droughts have drawn people to farm areas that have more water. The drawback is that such land types provide a significant amount of moisture to the atmosphere that eventually becomes rain, so their conversion to farmland poses a threat to future water availability.

"The removal of vegetal cover through burning would likely increase water runoff when it rains, potentially reducing their water retention capacity and invariably the soil moisture," Ichoku said. "The resulting farming would likely deplete rather than conserve the residual moisture, and in some cases, may even require irrigation. Therefore, such land cover conversions can potentially exacerbate the drought."

To read the paper, visit:

NASA study finds a connection between wildfires and drought 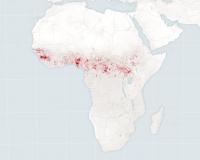