There are still a lot of unanswered questions about mollusks, e.g. snails, slugs and mussels. The research group of Andreas Wanninger, Head of the Department of Integrative Zoology of the University of Vienna, took a detailed look at the development of cryptic worms. The larvae of the "wirenia argentea" hold a much more complex muscular architecture than their adults -- they remodel during their metamorphosis. That's a clue that the ancestors had a highly complex muscular bodyplan. Their findings are published in the current issue of the scientific journal "Current Biology".

With over 200.000 species described, the Mollusca -- soft-bodies animals that, among others, include snails, slugs, mussels, and cephalopods -- constitutes one of the most species-rich animal phyla. What makes them particularly interesting for evolutionary studies, however, is not the sheer number of their representatives, but rather their vast variety of body morphologies they exhibit. Ever since they have been unambiguously assigned to the phylum, a group of worm-like, shell-less mollusks whose body is entirely covered by spicules -- the Aplacophora ("non-shell-bearers", usually small animals in the mm-range that inhabit the seafloors from a few meters to abyssal depths) has been hotly debated as being the group of today's living mollusks that most closely resembles the last common ancestor to all mollusks.

However, new studies on the development of a typical aplacophoran (Wirenia argentea, a species that was collected in 200 m depth off the coast of Bergen, Norway) tell a different story. Although their adult, worm-like body appears rather simple (hence the traditional assumption that they may constitute a basal molluscan group), their small, 0.1 to 0.3mm long larvae undergo a stage in which they show an extremely complex muscular architecture which is largely lost and remodeled during metamorphosis to become the simple muscular arrangement of the adult animal. The entire secret these animals hold only unravels if one takes a detailed look at the morphology of these tiny animals. In doing so, Andreas Wanninger, Head of the Department of Integrative Zoology of the University of Vienna, and colleagues found that the musculature of Wirenia larvae in detail resembles that of a quite different-looking mollusk, the so-called polyplacophorans or chitons (flat animals in the cm-range that bear 8 shell plates on their back). In contrast to the former, however, chitons do retain much of the larval muscles as adults. While it has been suspected for a long time that aplacophorans and chitons are closely related, it has often been argued that the aplacophoran morphology is closer to the ancestral molluscan condition than the polyplacophoran one. The current data paint a different picture: the fact that the highly complex larval muscular bodyplan is so similar in both groups but is only carried over into the adult stage in one of them -- the chitons -- strongly suggests that the common ancestor of both groups was of similar complexity; thereby implying that the worm-like groups lost these complex traits and became secondarily simplified over evolutionary time.

Interestingly, findings from the fossil record support this new developmental evidence. A recently described species from the Silurian -- Kulindroplax perissokosmos -- obviously had a mix of aplacophoran and polyplacophoran characters: while being long, slender, cylindrical in diameter, and covered by spicules -- closely reminding us of today's aplacophorans -- it had seven shells on its back. Although, at an age of 425 myr, too young to be considered the long-sought ancestor of polyplacophorans, aplacophorans and maybe even all mollusks (the origin of the phylum is known to date back to at least the Cambrian Explosion some 540 myr ago), this relative of the distant past proves that evolution has widely played with the combination of the various morphological character sets in individual molluscan groups. Taking together the data currently available, a coherent scenario emerges that strongly suggests that today's simple, wormy mollusks evolved from an ancestor that had a much more complex musculature (and probably overall internal anatomy) and was covered with protective shell plates.

Evolution is not a one-way road towards complexity 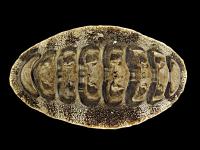