Tropical Depression 2E strengthened into Tropical Storm Boris briefly on June 3 before making landfall in southern Mexico and weakening into a depression. While Boris was building to tropical storm strength, NASA's Aqua and TRMM satellites passed overhead identifying heavy rainfall and the extent of the storm.

On June 3 at 19:15 UTC (3:15 p.m. EDT) the Moderate Resolution Imaging Spectroradiometer (MODIS) instrument aboard NASA's Aqua satellite captured a visible image of Tropical Storm Boris over Central America. Boris appeared circular in the imagery and its clouds covered southern Mexico and stretched over the border into northern Guatemala. The MODIS image also showed that clouds associated with a low pressure in the southwestern Gulf of Mexico, specifically, in the Bay of Campeche, were just to the north of Boris.

Earlier in the day at 06:02 UTC (2:02 a.m. EDT), NASA and the Japan Aerospace Exploration Agency's Tropical Rainfall Measuring Mission (TRMM) satellite passed over Boris. TRMM gathered data about rainfall rates occurring within the depression (at the time). TRMM showed that rain near the center was falling at a rate of over 61 mm (2.4 inches) per hour. A National Hurricane Center (NHC) discussion at the time noted "The cloud pattern has become elongated and is possible that the low-level center is on the southern edge of the convection due to wind shear. This is supported by a 0600 UTC TRMM pass which shows what appears to be a center located south of the thunderstorm activity."

At 5 p.m. EDT on June 3 Boris' maximum sustained winds increased to 40 mph (65 kph) and the storm was named and classified as a tropical storm. Boris made landfall around 06:00 UTC (2 a.m. EDT) today, June 4. By 11 a.m. EDT, Boris had weakened to a tropical depression but was soaking southern Mexico.

As indicated by the earlier TRMM satellite image, heavy rainfall is a component of Boris, and its slow movement is exacerbating the localized rainfall amounts. The National Hurricane Center noted that "Boris could still produce additional rainfall amounts of 4 to 8 inches with isolated amounts of up to 10 inches over the Mexican states of Oaxaca, Chiapas, Veracruz and Tabasco. These rains will bring isolated storm total amounts to as much as 20 inches especially over the higher terrain. These rains are likely to result in life-threatening flash floods and mud slides."

The Mexican Weather Service reported the city of Tonala on the coast of Chiapas has already recorded 12.5 inches (318 mm) of storm-total rainfall.

NHC expects that Boris will dissipate later today while it moves slowly northward and becomes a part of a large trough of low pressure extending from across the Isthmus of Tehuantepec northward into the Bay of Campeche. Once together, NHC expects the two systems to continue to produce very heavy rainfall over parts of Mexico. 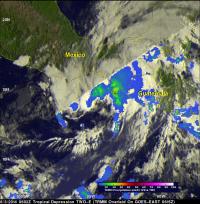