Researchers studying speciation of butterfly orchids on the Azores have been startled to discover that the answer to a long-debated question "Do the islands support one species or two species?" is actually "three species". Hochstetter's Butterfly-orchid, newly recognized following application of a battery of scientific techniques and reveling in a complex taxonomic history worthy of Sherlock Holmes, is arguably Europe's rarest orchid species. Under threat in its mountain-top retreat, the orchid urgently requires conservation recognition.

A lavishly illustrated publication, titled "Systematic revision of Platanthera in the Azorean archipelago: not one but three species, including arguably Europe's rarest orchid", was published today in the peer-reviewed open-access journal PeerJ.

The research team, led by independent botanist Prof. Richard Bateman in collaboration with local botanist Dr. Mónica Moura (University of the Azores) and plant morphologist Dr. Paula Rudall (of the Royal Botanic Gardens Kew), originally viewed these butterfly-orchids as a simple, tractable system ideal for studying the origin of species and so they initiated a focused exploration of all nine Azorean islands.

A combination of field and laboratory research soon showed that butterfly-orchids first colonized the Azores from the Mediterranean rather than from North America, rapidly undergoing miniaturization of their ancestrally large flowers. It proved easy to distinguish the widespread Short-spurred Butterfly-orchid (Platanthera pollostantha) from the rarer Narrow-lipped Butterfly-orchid (P. micrantha) using morphology, DNA sequences, and the identities of mycorrhizal fungi associated with the roots of the orchids. However, this 'simple' study was thrown into disarray when Dr. Moura explored remote dwarfed laurisilva forests along the highest volcanic ridge on the central island of São Jorge and found an unusual population of butterfly orchids.

"I immediately recognised the flowers as being exceptionally large for an Azorean butterfly-orchid," said Moura" and e-mailed images to Richard Bateman for confirmation that they were new to science". Data gathered subsequently in the laboratory using several analytical techniques all pointed to the discovery of a new species, and suggested that the species – named Platanthera azorica in the PeerJ paper – originated relatively recently by a remarkable restoration of the large-flowered morphology of its presumed mainland ancestor.

Bateman then realised that this "new" orchid had in fact been illustrated (but never correctly identified as a new species) in the first ever Flora of the islands, published in 1844, but thereafter had consistently been confused with other more frequent Azorean species. The illustrated specimen, deposited in the herbarium at Tübingen by German botanist Karl Hochstetter, was collected during his tour of six of the nine Azorean islands in 1838. However, as Hochstetter did not visit São Jorge (where P. azorica was most recently 're-discovered') it is entirely possible that the population he originally described may remain to be discovered on another Azorean island.

In the meantime, the team are anxious to obtain conservation protection for the newly-recognized and exceptionally rare orchid. "This remarkable species languished unrecognized for 173 years," commented Bateman. "It's rediscovery and recognition beautifully illustrate the value of integrating field-based and laboratory-based approaches to generate a modern monograph. This methodology both demonstrates that the species is genuine and allows us to make informed recommendations for its future conservation."

Link to the PDF of this Press Release: http://bit.ly/BatemanRelease

Link to the Press Preview of the Original Article (this link should only be used BEFORE the embargo ends): http://static.peerj.com/press/previews/2013/12/218.pdf (note: this is an author proof and so may change slightly before publication)

Link to the Published Version of the article (quote this link in your story – the link will ONLY work after the embargo lifts): https://peerj.com/articles/218 - your readers will be able to freely access this article at this URL.

PeerJ encourages authors to publish the full peer reviews, and author rebuttals, for their article. For the purposes of due diligence by the Press, we can provide these materials as a PDF (and they will be published alongside the final article). Please contact us at press@peerj.com to request a copy of the reviews.

Funding: Small grants to support fieldwork in the Azores were kindly provided by the Systematics Association (to RMB) and the Bentham-Moxon Trust (to PJR).

PeerJ is an Open Access publisher of peer reviewed articles, which offers researchers a lifetime membership, for a single low price, giving them the ability to openly publish all future articles for free. The launch of PeerJ occurred on February 12th, 2013. PeerJ is based in San Francisco, CA and London, UK and can be accessed at https://peerj.com/.

All works published in PeerJ are Open Access and published using a Creative Commons license (CC-BY 3.0). Everything is immediately available—to read, download, redistribute, include in databases and otherwise use—without cost to anyone, anywhere, subject only to the condition that the original authors and source are properly attributed.

Abstract (from the article)

Background and Aims. The Macaronesian islands represent an excellent crucible for exploring speciation. This dominantly phenotypic study complements a separate genotypic study, together designed to identify and circumscribe Platanthera species (butterfly-orchids) on the Azores, and to determine their geographic origin(s) and underlying speciation mechanism(s).

Methods. 216 individuals of Platanthera from 30 Azorean localities spanning all nine Azorean islands were measured for 38 morphological characters, supported by light and scanning electron microscopy of selected flowers. They are compared through detailed multivariate and univariate analyses with four widespread continental European relatives in the P. bifolia-chlorantha aggregate, represented by 154 plants from 25 populations, and with the highly misleading original taxonomic descriptions. Physiographic and ecological data were also recorded for each study population.

Conclusions. Although hybridity seems low, the excess of phenotypic over genotypic divergence suggests comparatively recent speciation. The most probable of several credible scenarios is that Azorean Platantheras represent a single migration to the archipelago of airborne seed from ancestral population(s) located in southwest Europe rather than North America, originating from within the P. bifolia-chlorantha aggregate. We hypothesise that an initial anagenetic speciation event, aided by the founder effect, was followed by the independent origins of at least one of the two rarer endemic species from within the first-formed endemic species, via a cladogenetic speciation process that involved radical shifts in floral development, considerable phenotypic convergence, and increased mycorrhizal specificity. The recent amalgamation by IUCN of Azorean Platantheras into a single putative species on their Red List urgently requires overruling, as (a) P. azorica is arguably Europe's rarest bona fide orchid species and (b) the almost equally rare P. micrantha is one of the best indicators of semi-natural laurisilva habitats remaining on the Azores. Both species are threatened by habitat destruction and invasive alien plants. These orchids constitute a model system that illustrates the general advantages of circumscribing species by prioritising field-based over herbarium-based morphological approaches. 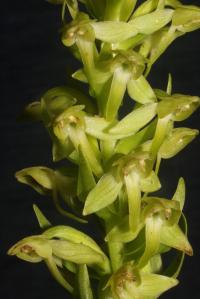 Details of the Flowers