Solar energy dominated global investment in new power generation like never before in 2017.

The world installed a record 98 gigawatts of new solar capacity, far more than the net additions of any other technology - renewable, fossil fuel or nuclear.

Solar power also attracted far more investment, at $160.8 billion, up 18 per cent, than any other technology. It made up 57 per cent of last year's total for all renewables (excluding large hydro) of $279.8 billion, and it towered above new investment in coal and gas generation capacity, estimated at $103 billion.

A driving power behind last year's surge in solar was China, where an unprecedented boom saw some 53 gigawatts added - more than half the global total - and $86.5 billion invested, up 58 per cent.

The Global Trends in Renewable Energy Investment 2018 report, released today by UN Environment, Frankfurt School - UNEP Collaborating Centre, and Bloomberg New Energy Finance, finds that falling costs for solar electricity, and to some extent wind power, is continuing to drive deployment. Last year was the eighth in a row in which global investment in renewables exceeded $200 billion - and since 2004, the world has invested $2.9 trillion in these green energy sources.

Overall, China was by far the world's largest investing country in renewables, at a record $126.6 billion, up 31 per cent on 2016.

A record 157 gigawatts of renewable power were commissioned last year, up from 143 gigawatts in 2016 and far out-stripping the net 70 gigawatts of fossil-fuel generating capacity added (after adjusting for the closure of some existing plants) over the same period.

"The world added more solar capacity than coal, gas, and nuclear plants combined", said Nils Stieglitz, President of Frankfurt School of Finance & Management. "This shows where we are heading, although the fact that renewables altogether are still far from providing the majority of electricity means that we still have a long way to go."

Angus McCrone, Chief Editor of Bloomberg New Energy Finance and lead author of the report, said: "In countries that saw lower investment, it generally reflected a mixture of changes in policy support, the timing of large project financings, such as in offshore wind, and lower capital costs per megawatt."

Global investments in renewable energy of $2.7 trillion from 2007 to 2017 (11 years inclusive) have increased the proportion of world electricity generated by wind, solar, biomass and waste-to-energy, geothermal, marine and small hydro from 5.2 per cent to 12.1 per cent.

The current level of electricity generated by renewables corresponds to about 1.8 gigatonnes of carbon dioxide emissions avoided - roughly equivalent to those produced by the entire U.S. transport system.

The Global Trends in Renewable Energy Investment 2018 report was funded by the German Federal Ministry for the Environment, Nature Conservation and Nuclear Safety

All renewable energy investment totals exclude large hydro, which falls outside the scope of the report.

UN Environment is the leading global voice on the environment. It provides leadership and encourages partnership in caring for the environment by inspiring, informing, and enabling nations and peoples to improve their quality of life without compromising that of future generations. UN Environment works with governments, the private sector, civil society and other UN entities and international organizations across the world. To ensure its global effectiveness UN Environment supports six regional offices, a number of sub-regional and country offices and a growing network of centres of excellence.

The Centre is committed to facilitate the necessary structural change of energy supply and use around the globe by helping to catalyse private sector capital flow towards investments in sustainable energy and climate change mitigation and adaptation.

A primary objective is to bridge the public-private sector gap through think-tank activities combining research, education and project implementation. A key part of this process is to enable the public sector to put in place policies, regulations and initiatives that overcome existing or perceived investment risks and other barriers seen by the private sector due to unfamiliarity with clean energy initiatives, particularly in developing countries. Together with partners in different institutions, the Centre is elaborating and field-testing new financial instruments and implementing cutting-edge projects that serve the growing markets for energy-efficient and clean energy production.

Leveraging the most sophisticated new energy data sets in the world, BNEF synthesizes proprietary data into astute narratives that frame the financial, economic and policy implications of emerging energy technologies. 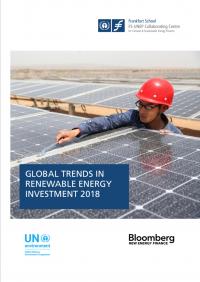