What if doctors could visualize all of the processes that take place in the brain during the development and progression of Alzheimer's disease? Such a window would provide a powerful aid for diagnosing the condition, monitoring the effectiveness of treatments, and testing new preventive and therapeutic agents. Now, researchers reporting in the September 18 issue of the Cell Press journal Neuron have developed a new class of imaging agents that enables them to visualize tau protein aggregates, a pathological hallmark of Alzheimer's disease and related neurodegenerative disorders, directly in the brains of living patients.

In the brains of patients with Alzheimer's disease, tau proteins aggregate together and become tangled, while fragments of another protein, called amyloid beta, accumulate into deposits or plaques. Tau tangles are not only considered an important marker of neurodegeneration in Alzheimer's disease but are also a hallmark of non-Alzheimer's neurodegenerative disorders, tauopathies that do not involve amyloid beta plaques. While imaging technologies have been developed to observe the spread of amyloid beta plaques in patients' brains, tau tangles were previously not easily monitored in the living patient.

In this latest research in mice and humans, investigators developed fluorescent compounds that bind to tau (called PBBs) and used them in positron emission tomography (PET) tests to correlate the spread of tau tangles in the brain with moderate Alzheimer's disease progression. "PET images of tau accumulation are highly complementary to images of senile amyloid beta plaques and provide robust information on brain regions developing or at risk for tau-induced neuronal death," says senior author Dr. Makoto Higuchi, of the National Institute of Radiological Sciences in Japan. "This is of critical significance, as tau lesions are known to be more intimately associated with neuronal loss than senile plaques."

The advance may also be helpful for diagnosing, monitoring, and treating other neurological conditions because tau tangles are not limited to Alzheimer's disease but also play a role in various types of dementias and movement disorders.

Maruyama et al.: "Imaging of Tau Pathology in a Tauopathy Mouse Model and in Alzheimer Patients Compared to Normal Controls" 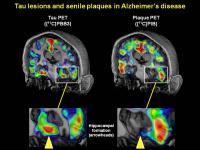