Researchers from North Carolina State University have developed a memory device that is soft and functions well in wet environments – opening the door to a new generation of biocompatible electronic devices.

"We've created a memory device with the physical properties of Jell-O," says Dr. Michael Dickey, an assistant professor of chemical and biomolecular engineering at NC State and co-author of a paper describing the research.

Conventional electronics are typically made of rigid, brittle materials and don't function well in a wet environment. "Our memory device is soft and pliable, and functions extremely well in wet environments – similar to the human brain," Dickey says.

Prototypes of the device have not yet been optimized to hold significant amounts of memory, but work well in environments that would be hostile to traditional electronics. The devices are made using a liquid alloy of gallium and indium metals set into water-based gels, similar to gels used in biological research.

The device's ability to function in wet environments, and the biocompatibility of the gels, mean that this technology holds promise for interfacing electronics with biological systems – such as cells, enzymes or tissue. "These properties may be used for biological sensors or for medical monitoring," Dickey says.

The device functions much like so-called "memristors," which are vaunted as a possible next-generation memory technology. The individual components of the "mushy" memory device have two states: one that conducts electricity and one that does not. These two states can be used to represent the 1s and 0s used in binary language. Most conventional electronics use electrons to create these 1s and 0s in computer chips. The mushy memory device uses charged molecules called ions to do the same thing.

In each of the memory device's circuits, the metal alloy is the circuit's electrode and sits on either side of a conductive piece of gel. When the alloy electrode is exposed to a positive charge it creates an oxidized skin that makes it resistive to electricity. We'll call that the 0. When the electrode is exposed to a negative charge, the oxidized skin disappears, and it becomes conducive to electricity. We'll call that the 1.

Normally, whenever a negative charge is applied to one side of the electrode, the positive charge would move to the other side and create another oxidized skin – meaning the electrode would always be resistive. To solve that problem, the researchers "doped" one side of the gel slab with a polymer that prevents the formation of a stable oxidized skin. That way one electrode is always conducive – giving the device the 1s and 0s it needs for electronic memory.

The paper, "Towards All-Soft Matter Circuits: Prototypes of Quasi-Liquid Devices with Memristor Characteristics," was published online July 4 by Advanced Materials. The paper was co-authored by NC State Ph.D. students Hyung-Jun Koo and Ju-Hee So, and NC State INVISTA Professor of Chemical and Biomolecular Engineering Orlin Velev. The research was supported by the National Science Foundation and the U.S. Department of Energy. 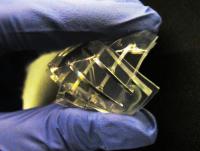 Memory Tech That is the Consistency of Jell-O 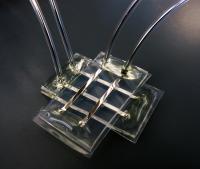