(Santa Barbara, Calif.) –– A recent study published by an international research team working at UC Santa Barbara's National Center for Ecological Analysis and Synthesis (NCEAS) has found that loss of biodiversity impacts the environment as significantly as climate change and pollution. The study, titled, "A global synthesis reveals biodiversity loss as a major driver of ecosystem change," was published May 2 in the journal Nature.

"For the past 15 years, ecologists have built a rich understanding of the consequences of humans driving species extinct. What we didn't know before this paper is whether those impacts of species loss rank up there with those from the major drivers of environmental change," said Jarrett Byrnes, a postdoctoral fellow with NCEAS.

Led by Western Washington University biologist David Hooper, the scientists, including those from institutions in the U.S., Canada, and Sweden, examined the effects of various environmental stressors on plant growth and decomposition, two crucial processes in any ecosystem. With data synthesized from almost 200 published studies, they measured the rate of species loss in different ecosystems, and found that the greater the plant species loss, the higher the negative impact on plant growth. The effects of biodiversity loss on biomass were similar to the effects from other environmental stressors, including global warming and pollution.

In the bigger picture, other ecosystem functions that provide clean food, air and water could eventually suffer.

The news looks bleak, with some projections suggesting that, at the current rate of biodiversity loss, Earth may face another mass extinction within 240 years. To combat this scenario, said Byrnes, species loss has to be considered alongside the more prominent forms of environmental change.

For the researchers, there is more to be studied, as they plan to dig deeper into the effects of species loss on multiple functions and explicitly link loss of species to changes in ecosystem services.

"One thing this study opens up is the need to better understand the interactions between environmental change and species loss. They're not independent, and may interact in some particularly unexpected ways," said Byrnes. 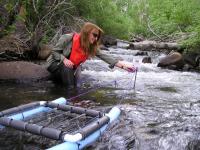 Researcher Measuring the Productivity of Algae